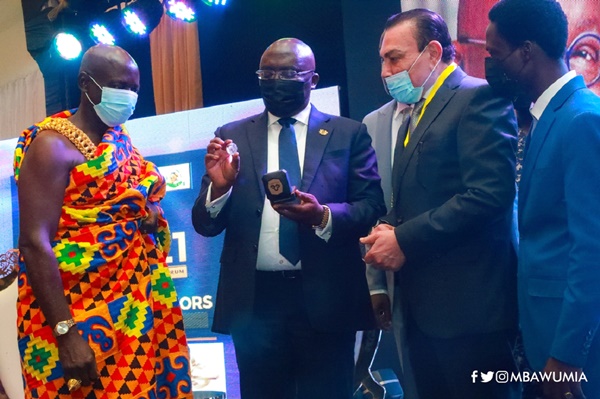 The Vice President, Dr Mahamudu Bawumia, has hailed the decision by the Bank of Ghana to implement a Gold Purchase Programme designed to purchase locally-produced gold, describing it as a master stroke in the quest for stronger macroeconomic management and in providing a bulwark for the Cedi.

Addressing participants at the Ghana Gold Expo 2021 (Ghana Mining Week ’21), a mining policy forum, in Takoradi, on Thursday, 1st July 2021, Vice President Bawumia said the benefits of having a healthy amount of physical gold in a country’s reserves are varied and enormous, including shoring up the value of the local currency. The BoG decision, he indicated, is a “game changer.”

“The launch and implementation of the Domestic Gold Purchase Programme by the Bank of Ghana and the Community mining programme together are going to be a catalyst for the formalization of our Artisanal Small scale sector. The Domestic Purchase Programme by the central bank and other programmes by PMMC and Ghana Revenue Authority will in the coming years set everybody’s mind at ease regarding the volume and value of gold legitimately exported and reserved.

“Ghana is Africa’s largest gold producer, having overtaken South Africa in 2019. But Ghana’s extracted gold assets are based on the royalty take, limited dividends and corporate income tax.

“These fiscal gains are typically taken in cash, and about 80% paid into the Consolidated Fund. The Bank of Ghana holds moderate amount of physical gold of 8.7 tonnes as part of its reserves. For nearly 3 decades, almost 60 years, we have not added an ounce to our reserve holdings.

“But gold has now become the cornerstone of central banks’ modern reserve management. Central banks have become the third force behind jewellery and technology and investment sectors in the global gold demand in the past decade.”

Recalling his suggestion to the Bank of Ghana a year ago to consider exploring the possibility of purchasing locally-produced gold as a way of boosting the economy and shoring up the value of our currency, Dr Bawumia expressed delight that the Bank had taken the challenge up and implemented it.

“The Bank of Ghana spent a whole year carefully studying the entire gold production value chain and putting in place the necessary internationally acceptable procedures and has, since June 2021, begun a Gold Purchase Programme that will strengthen the future macroeconomic management and shore up the Cedi over time with real gold backing. The benefits are enormous and we can only hope and encourage the Bank to continue with this initiative.”

According to the World Gold Council, central banks acquired a record level of about 670 tonnes to boost their reserves. Gold has now become the cornerstone of Central Banks’ reserve management. In 2020, in the midst of the Covid-19 pandemic, Turkey was the largest annual gold buyer, adding 134.5 tonnes to its official gold reserves, followed by India (93.8 tonnes), United Arab Emirates (22 tonnes) and Qatar (9.18 tonnes).

Ghana’s entire gold reserves, at 8.7 tonnes, is equivalent to only 6.9 percent of South Africa’s gold reserve holdings of about 125.3 tonnes, despite being the largest gold producer in Africa and sixth in the world. The South African Reserve Bank has managed and held gold reserves since 1925 and purchases nearly all locally-produced gold. Other major players in the financial sector, such as the IMF and the World Bank, also hold large reserves of gold.

The BoG intends to focus its purchasing plans on artisanal small scale mining, which account for 50% of Ghana’s gold production. With government rolling out Community Mining Schemes and providing the miners with equipment and new technology that requires very little water, sometimes just a barrel, to extract the gold from the ore without using zero mercury or cyanide, the impact of a ready market for sustainably mined gold on the environment and the lives of the people in mining communities is expected to be far reaching.

Each Community Mining Scheme engages 3,000 miners, and with a projected 100 of such schemes by the end of the year, the incidence of galamsey and youth unemployment are expected to be significantly reduced, if not completely eliminated.