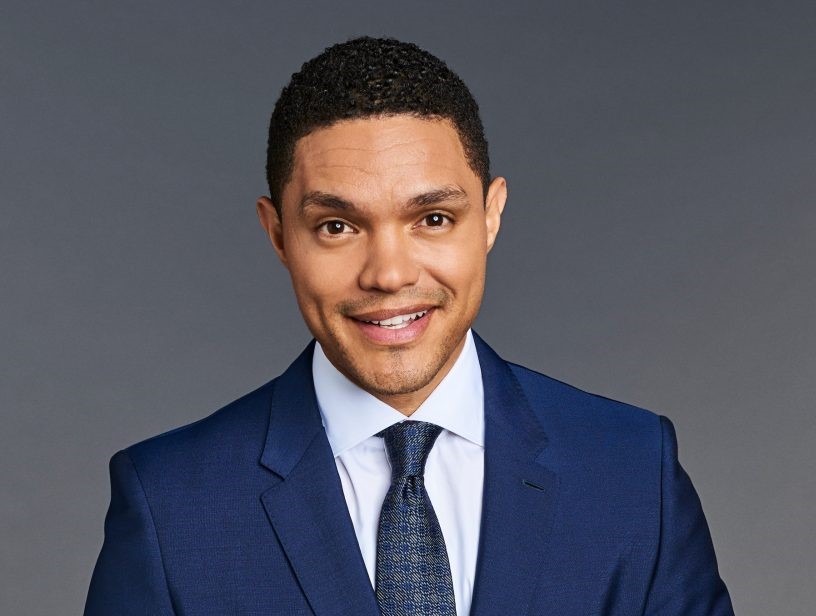 African comedy over the last decade has showed immense growth and gained popularity, producing some of the best comedians the world has ever seen. Comedians have creatively turned normal every day happenings into artistic expressions, thereby inspiring the continent and the world at large.

Africa’s most famous comedian, Trevor Noah is well known for his unapologetic approach to race, apartheid and politics. Born to a Swiss father and a Xhosa mother, Trevor’s struggle to identify to a one specific stereotype makes him a genius when it comes to comedy as he both relates to his audience at the same time, sharing a unique perspective to everyday issues.

Trevor was the first South African comedian to sell out a one-man show and has continued to break records ever since. In 2015, Trevor took over as host of ABC’s “the daily show” from Jon Stewart, becoming Africa’s biggest comedy export of all time

Born and raised in Abia State, Nigeria, Basket mouth (real name Bright Okpocha) is a comedian whose resume one cannot simply ignore. The first African to ever host a show at the Apollo in London, Basket mouth has continued to set trends performing at events like Lord of the Ribs, Comedy Central Presents and the Basket mouth live at the 02 arena in London.

Referred to by many as the “Queen of Africa Comedy”, Anne Kansiime is a Ugandan comedienne, entertainer and actress. She first broke into the scene with the YouTube Series, Minibuzz, in which she made fun of Ugandans’ experience in daily public transport.

Her stand-up shows have sold out arenas and auditoriums in major cities including London, Kuala Lumpur, Lilongwe, Gaborone and Harare. With more than 15 million views online and a YouTube silver play button (an award for YouTubers who hit 100,000 subscribers), Anne continues to entertain people across the continent through her online videos and stand up shows.

Born in the Democratic Republic of Congo and raised in the UK, Eddie Kadi’s blend of English wit and African humour has made him one of the most successful black comedians in the UK. With milestones like appearances on the BBC’s Comedy Empire, as well as leading roles in movies like Anuvahood, Shank and Gone Too Far, Eddie Kadi’s ability to entertain and be funny across multiple mediums makes him one of the most outstanding comics to ever come out the continent. Apart from comedy acts, Eddie is also a well known radio presenter, MC, and philanthropist.

Satirical, genuine and critical are some of the few words one can use to describe Loyiso’s comedy. Usually taking jabs at politicians, the stand up comedian is also the founder of South African satirical news show, Late Night News (LNN), which got an Emmy award nomination for best comedy series in 2014. Gola is also well known for his one-man show, Loyiso Gola for president, which happened adjacent to South African elections in 2007/8.

Egyptian-American Shaher Ronnie Khalil is a comedian who has toured the United States, headlined in four continents and whose comedy has been enjoyed by millions around the world. With features on ABC News, CNN, Al Jazeera and the Conan O’Brien show, Khalil’s “Politically incorrect” storytelling skills places have earned him a reputation as one of Africa’s biggest export to the comedy world. Khalil currently lectures around different colleges in the United States on topics such as success and motivation.

Known as the Queen of Zulu comedy, Celeste Ntuli will always be remembered by south Africans for her outstanding performance in the 2009 SABC 1 competition “so you think you’re funny”. After getting exposure from that show, the former bookseller has since worked with big names in comedy like Loyiso Gola and Kagiso Lediga, making appearances in shows like the Emmy Award nominated Late Night News, The Bantu Hour and Laugh out Loud. Celeste also recently entertained South Africans when she appeared as part of the sequel to the all women comedy show “Bitches Be Back”, which she performed with other comedians like Anele Mdoda, Tumi Morake, and Noko Moswete. Celeste, who also dabbles as an actress, remains one of the strongest and funniest comedians in South Africa with her topics ranging from issues like weight loss and singleness to gender and feminism.

Natural, blunt and purely hilarious is Uganda’s Patrick Indring, or as he is known on stage, Salvador. Salvado hails from “ombokolo”, a couple of kilometers outside Uganda’s capital, Kampala, a place he continually loves to make fun of in his sets.

A trained telecommunications professional, Salvado left his career after winning a comedy competition and now bears the title of “Uganda’s funniest face”. His attention to ridiculous details when narrating stories has brought him a huge fan base all across Africa, even attracting international media such as vogue, CNN among many others.

Known to many as Tatafo, Helen Paul is a Nigerian stand up comedianne whose Quirkiness, spontaneity and voice manipulation skills compare to no other. Helen, who is a graduate of the University of Lagos, broke into the comedy scene as as a Mischievous comic character on a radio program known as “Wetin Dey” on Lagos’ Radio Continental where she played “Tatafo” – a witty kid who addressed Lagos’ major problems in a childlike and satirical manner. Helen now runs the Helen Paul Academy where she trains student creative art and how it affects people’s daily lives.

Carl Joshua Nqube is a Zimbabwean stand-up comedian who broke into the comedy world with his one-man show, the big announcement. However, his biggest break was when he joined well-known South African comedy club, Parker’s club. He has performed all across the world from Johannesburg to Adelaide, Abuja to Nairobi alongside names such as Basket mouth, Kagiso Ladeba among many more. He currently hosts his own TV show called “Late Night With Carl.”

South African Comedienne Tumi Morake is definitely one of the funniest names on the continent. Her experience as a puppeteer, actress and facilitator has helped her to have an imaginable control over multiple audiences. The comedienne, who started comedy in 2005, has performed with names like David Kau, Chris Forrest among many others at big festivals such as Heavyweights Comedy. Her most recent show, Bitches Be Back, where she performed with other female South African comedians has become one of the most memorable comedy shows in South African entertainment History.

Daliso Chaponda is a UK based Malawian comedian well known for his versatility and “quite on the edge” jokes. A good example of how versatile of a performer Daliso can be is how he performed a “filthy set in silhouettes strip clubs in Birmingham and about two days later did a family show at the 2007 greenbelt Christian festival. Daliso has performed all across the world in cities like Cape Town, London and has made appearances on the BBC’s “The world stands up”. He annually hosts a show in his hometown of Lilongwe called “laughrica” where he invites different local and international comedians for a one-night comedy event.

One of the most common faces on Kenyan Television, Eric Omondi is a comedian and an activist who does not like to be called an entertainer. “ I am a doctor, I treat illnesses like stress”, once said the hilarious Omondi in an interview with a local newspaper. The comedian, who started out as a noise maker in class, made his breakthrough when he appeared on Kenya’s well known TV show, The Churchill show. It was there that Eric became a household name and a comedy power force in the region, even performing at big events such as the African Kings of Comedy Festival in Nigeria.

One of South Africa’s black comedy trailblazers, Kagiso Lediga is an icon when it comes to African comedy. A natural storyteller who usually narrates about what it was like growing up in the townships during the apartheid era, Kagiso has performed in comedy clubs from New York to Toronto and in different countries like Jamaica, Botswana, Swaziland and Nigeria. Kagiso, who has also performed at the prestigious Edinburgh Comedy Festival, currently host a weekly TV show called the bantu hour, which he co-host with legendary Jazz musician Hugh Masekela.