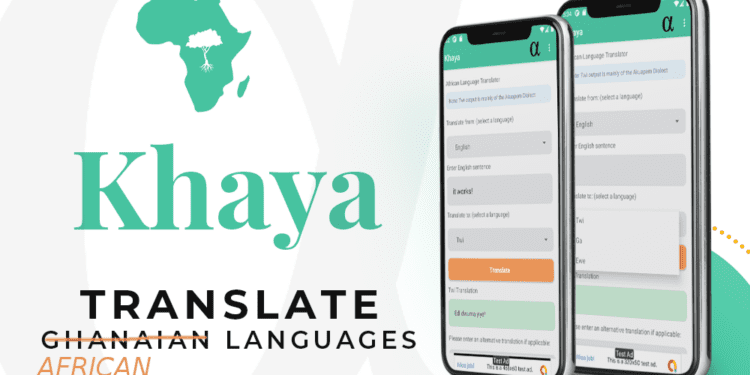 Awesome! Did you know Khaya is Ghana’s first Translator App?

Khaya is a mobile app that allows easy translation of selected Ghanaian Languages, including Yoruba (a Nigerian Language). It comes at a time when the world is leaning more towards digitization. Every bit of our socio-cultural and economic being is going online thanks to technology. A major component of globalization is communication. This makes Khaya a timely project. Speaking and understanding Ghanaian languages becomes more accessible. Even so, it represents the first step towards the preservation of Ghanaian languages.

This innovative piece of a mobile application runs on both Android and iOS devices. It is essential for all who seek to translate sentences, words, or phrases from English to four other languages. It also allows for one to translate the same from the four mentioned African languages to English.

An interesting feature of this AI beauty is that it goes beyond the knowledge base of the creators. The application allows users to enter alternative meanings to words, phrases, and sentences. This feature suggests that the vocabulary base will continue to grow with a rise in users. For end-users who prefer a voice-to-text transcription, Khaya is definitely for you. This particular feature is definitely a favorite for people interested in learning or speaking any of the languages.

How many languages can Khaya Translate?

Currently, Khaya features five languages, predominantly Ghanaian. The languages are Twi, Ga, Ewe, Yoruba, and English. The creators have indicated they’re working around the clock to add several other African languages to the App, including Hausa, Dagbani, Swahili to mention just a few. They are also working on adding voices for text to speech pronunciation in future releases. The idea is to preserve languages, and offer diasporas, and non-speakers the opportunity to understand, speak and write the included languages.

Who are the Brains behind Khaya?

Khaya is the brainchild of two teams; the Algorine Research team and the Ghana Natural Language Processing group. The Ghanaian Scientist and Entrepreneur Paul Azunre, also known in showbiz as the musician Dr Pushkin, is an integral part of the team.