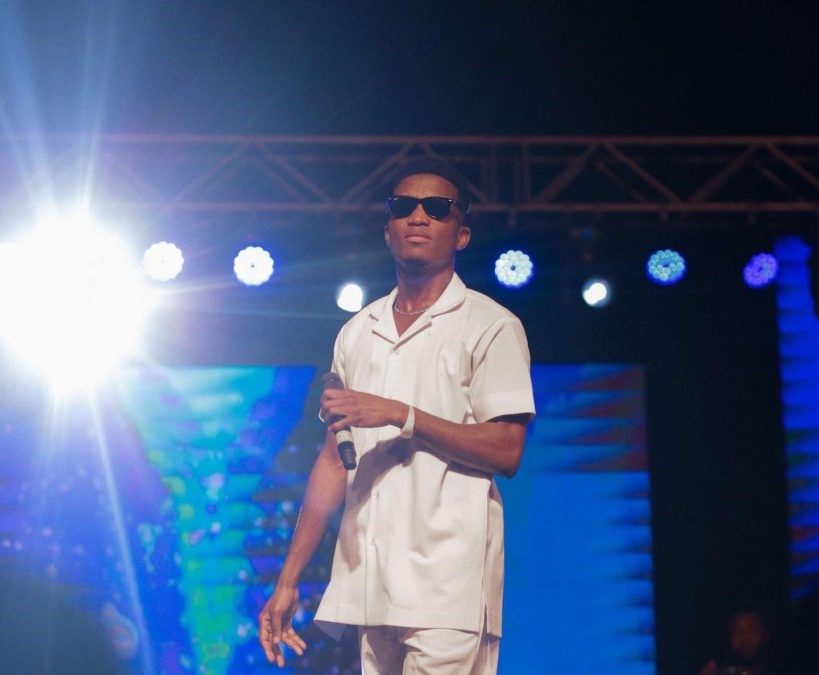 The early birders trickled in tens, which grew into hundreds until the Takoradi Technical University park was bursting at its seams by nightfall with thousands of fans anticipating a showdown.

Friday, December 24 went down as a memorable one in the Western Region as far as music is concerned.

The Made In Taadi Concert headlined by the award-winning artiste, Kofi Kinaata brought together people from across the country.

It was going to be a long night but the spectators came prepared. Considering that the 2020 edition had been cancelled due to Covid-19 restrictions, the patrons anticipated a spectacle worth the wait.

Like his name, Martin King Arthur, the highlife musician walked in like a king and took a seat for a few minutes.

In his all-white attire, the four-time VGMA Songwriter of the Year displayed his rapping prowess – confirming to many present that his title, ‘The Fante Rap God’ is not just a name.

Subsequently, Kinaata and his live band electrified the crowd with his timeless songs.

The crowd could not get enough of their king. They yelled for more and more was given to them.

But the show had just begun. Gospel artiste, Empress Gifty took her turn on stage. Dressed in fancy attire, the ‘Fɛfɛɛfɛ’ hitmaker made it clear that she was also in the region for the Westside Carnival.

Her costume was specially crafted to fit the annual masquerade-themed festival which would come off a few hours later.

The Kumericans were not left out. With Kofi Jamar, Kweku Flick, and Amerado representing, they thrilled fans with Ekoso, Money, and Abotrɛ respectively.

Originally from the Western Region, music duo; Keche shone bright with their performance.

DopeNation chased the dawn by putting their best foot forward. Their single, Zanku featured prominently in their act.

Storming the stage with Ameno Remix, MzVee also delighted spectators with her Rewind, Bend down, Come and see my mother, amongst others.

Massive love was shown to Pappy Kojo. The rapper had the crowd grinning from ear to ear as they rapped his tracks verbatim.

Quamina MP was phenomenal. A tweetheart, took to his timeline to say, “He just makes performing looks easy.”

Kofi Kinaata mounted the stage again. This time, in what he described as his working gear, he performed with his colleague and long-time friend, Donzy Chaka.

The duo performed ‘Paapa’ which got the spectators in a different mood.

The time was now riped for Kinaata to deliver the fans’ favorite, ‘Play’. And as envisaged, the crowd waved their hands, jammed – making memories the best way they could.

And as promised, the Fante Rap God did not disappoint the over 40,000 patrons who trooped to the Takoradi Technical University park to witness the concert’s 4th edition.

Signing off in a grand style, Kofi Kinaata performed his latest single, ‘Wopre’ which got the crowd raging on and on.

The gathering doffed their hats to the talented performers who made their Christmas Eve a day to remember.

One of Kinaata’s intriguing works this year was his Thy Grace series. On Part 2, he sings that “even the charcoal seller’s child has worn a white attire,” a phrase which resonated with many who see his story as an inspirational one.

On that Christmas eve, many believe that history was made, history was written in the capital of the Western Region because the ‘Charcoal seller’s son’ wore white and brought Takoradi to a rather marvelous standstill.