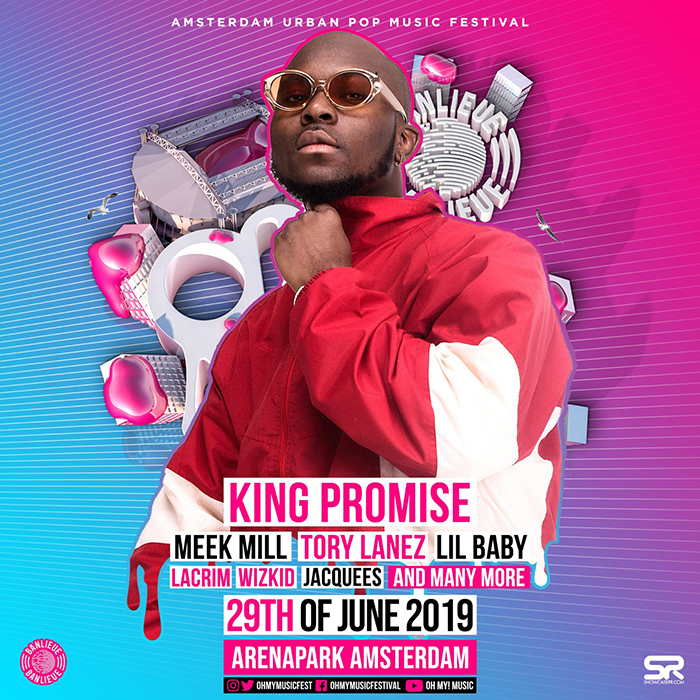 Ghanaian born songwriter and Afro-pop singer, Gregory Bortey Promise Newman, who professionally performs on stage as King Promise is billed to execute a performance at this year’s edition of Oh My! Music Festival, an Amsterdam Urban Pop Music Festival.

The ”Tokyo” crooner is the only performing art brand from Ghana to represent this particular geographic location on the continent at the musical concert which is been slated for June 29, 2019 at the Arena Park in Amsterdam.

Oh My! Music Festival is an annual urban music festival in Amsterdam. The largest of its kind in Europe, the festival attracts people from all over the world to celebrate hip hop and R&B.

With a lineup that mixes international with national stars such as Meek Mill, Tory Lanez, Wizkid, Lil Baby and others as well as the upcoming stars of tomorrow, Oh My! Music Festival is the main destination for urban music fans.

Set outdoors in Arena Park Amsterdam, surrounded by some of the main venues of the city, the festival features four distinct music areas.

Multi-talented musician, King Promise will perform alongside great, heavyweight and pioneers in the entertainment fraternity such as Wizkid, Meek Mill, Tory Lanez, and other music crooners at the annual Amsterdam biggest urban music festival on the European continent.