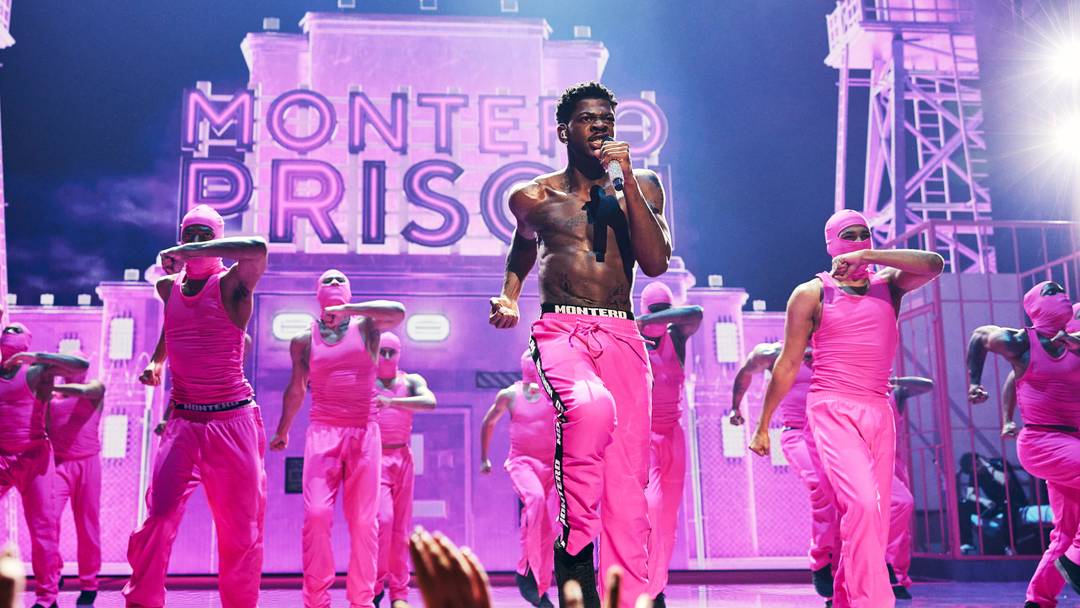 The “power bottom rapper” and five-time nominee at the 2021 Video Music Awards took the stage at Barclays Center on Sunday (September 12) to perform some of his most recent hits. And he did not disappoint. Performing on a bright-pink set alongside his “Industry Baby” collaborator Jack Harlow, Nas X stepped out onto the stage in his finest marching-band attire.

The duo and their hunky, all-male backup dancers then took a trip to the (fictional) Montero State Prison, spitting bars while Nas X stripped off his shirt. Harlow rapped his verse in all-black, all-vinyl prison suit, swapping out a certain lyric about “handprints on her ass cheeks” with a series of claps.

As if that weren’t saucy enough, Nas X darted even further back onstage into the steamy Montero Prison showers for a sultry, skin-filled performance of his smash-hit single “Montero (Call Me By Your Name).”

We have no words, just one question: Where can we snag a pair of those rhinestone-studded “Montero” boxers?

The 22-year-old rapper first catapulted to fame in 2019 with “Old Town Road,” his chart-topping runway hit featuring legend Billy Ray Cyrus. He has kept the momentum up with a smattering of new releases, most notably “Montero” and its accompanying music video. The song’s epic, unapologetically queer visuals — which depict a CGI’d Nas X descending into hell via stripper pole and giving Satan a lap dance — scored him nods at this year’s VMAs for Best Video, Best Direction, Best Art Direction, Best Visual Effects, and Best Video for Good. Take that, haters!

It’s not Nas X’s first VMAs rodeo, either. After an electrifying performance of his song “Panini,” he scored Song of the Year and Best Direction at the 2019 VMAs for “Old Town Road.” And those were just two of eight total categories he was nominated in that year. Hell, his debut album, Montero, hasn’t even dropped yet. One thing’s for certain: This “Industry Baby” has an exciting career ahead of him.