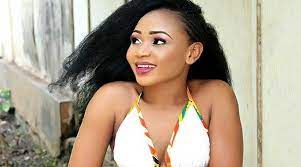 Popular Ghanaian- US based legal luminary and law lecturer at the University of Florida, Professor Stephen Kwaku Asare popularly known as Kwaku Azar has reacted to the 90 day jail term of embattled video vixen and actress, Akuapem Poloo.

The actress had earlier on today 16th April 2021 been jailed three months ( 90 days) by an Accra Circuit Court presided over by Her Honour Christine.

The Court had earlier deferred her sentencing to today Friday 16th, April 2021 for her to undergo a pregnancy test to ensure she was not pregnant before her sentencing.

Before her sentencin was announced, the presiding Judge confirmed that she was not pregnancy after her pregnancy test as result came out negative.

However, Kwaku Azar in a Facebook post sighted by GBAfrica.Net, reacting to Akuapem Poloo’s sentence indicated that the society that has founded a way to jail her over her indecent picture will find ways to send galamsey queen, Aisha Huang to China for coming to Ghana to engage in illegal mining.

According to him, the thinking that has jailed the actress was the same thinking that sent one Mr Akoto to prison in 1959 and has held Afoko in jail without trial since 2015.

” The same thinking that sent Akoto to prison in 1959, and has held Afoko in jail without trial since 2015, has sent Akuapem Poloo to prison for 90 days for sharing a picture that our moral society considers indecent.
Meanwhile, this same society will find ways to send Aisha Huang to her homeland for coming to destroy our environment”