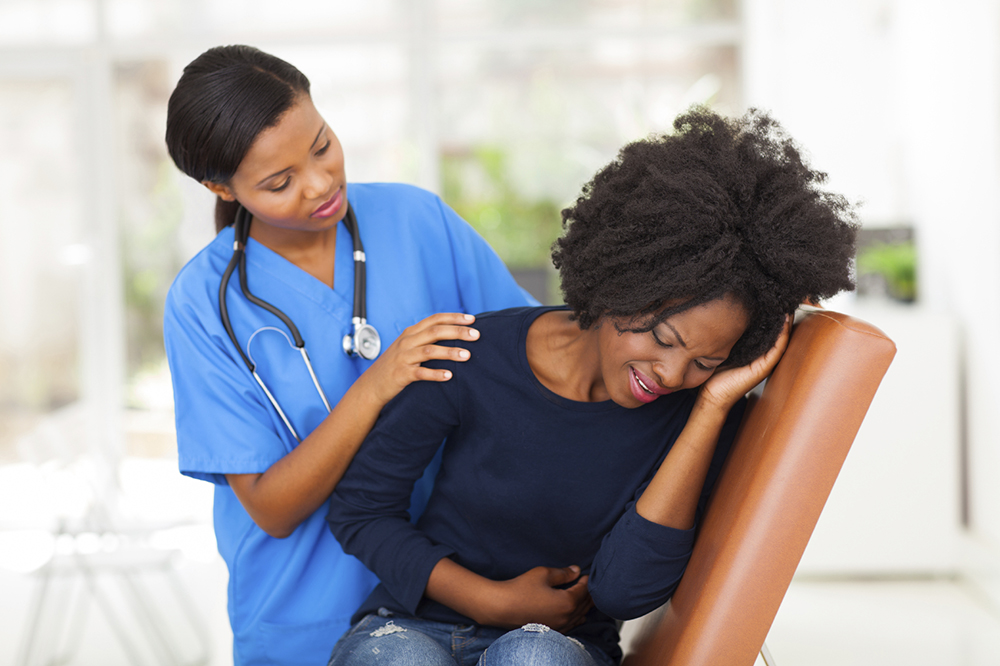 You’ve been seriously bloated, moody, and tired. You’ve got monster cramps, and your face is as simply as a 17-year-old boy’s. In other words, you’re suffering from all of the classic signs of your monthly flow—but your period is totally MIA.

First: Don’t freak. It turns out, there are tons of reasons you’ve got those tell-tale period symptoms, but no period.

“Hormonal changes related to ovulation can affect some of the same pathways in your brain that might be affected by other medical conditions, causing mood swings that feel similar to your period but aren’t related to ovulation or menses,” says Chailee Moss, M.D., an ob-gyn at Johns Hopkins Medicine.

What’s more, some physical abnormalities in your uterus and ovaries can also cause cramping that feels like PMS, she adds.

While skipping a period every now and then is usually nothing to worry about, if you have a fever, significant nausea or vomiting, or pain that you can’t control with simple OTC medications or that doesn’t improve within a week, check in with your doctor right away.

Otherwise, it’s time to see your doc if you skip more than three cycles in a row, suggests Chicago-based ob-gyn Jessica Shepherd, M.D.—here’s what might be going on down there.

Every once in a while, your body goes through all of the hormonal changes associated with PMS, but if you didn’t actually release an egg that month, you won’t actually get your period. Known as anovulation, it’s more common than one might think. “Ten to 18 percent of all regular cycles are anovulatory,” Shepherd adds. In case you’re wondering, yes, that stat can make getting pregnant tricky!

If you’ve had unprotected sex in the last month, were a bit lax about taking your pill, or rely on the pullout method for birth control, it’s worth taking a pregnancy test. Many of the symptoms of early pregnancy, including breast tenderness, mood swings, fatigue, and cramping, are the same ones that you were already experiencing month to month before and during your period.

Your thyroid, a small butterfly-shaped gland in your neck, regulates many of your body’s functions, including your metabolism and menstrual cycles. If your thyroid gets out of whack, your cycles can become irregular, says Shepherd. The result: You may you go a long stretch without having your period while still experiencing period-like symptoms, says Moss.

Because your thyroid regulates your brain function, mood swings that you thought were PMS may be related to your neurologic function, she explains. And spotting or cramping may occur because the lining of your uterus has built up but hasn’t shed because you’re not ovulating.

Be sure to check in with your doctor if you’re experiencing other symptoms of a thyroid condition, including sudden unexplained weight loss or gain, shaking, heart palpitations, or significant fatigue.

One very common side effect of hormonal IUDs is skipped periods. That’s because one of the ways the device prevents pregnancy is by thinning out the endometrial lining so there’s nothing to shed come that time of the month.

And, while they don’t typically nix your flow altogether, birth control pills can result in super-light flows or spotting. So you might feel period symptoms like breast tenderness even without a heavy, full-blown period, says Shepherd.

Stress is a surprisingly common reason for missing your period. “Stress increases your cortisol levels, which affects your hormone balance,” says Shepherd—including the hormones that regulate your ovaries and uterine lining.

Exams, deaths, and even breakups are all big-time stress-inducing events that can cause periods to go awry. But these life-changing biggies aren’t the only reasons you might be feeling the effects of stress.

“Some people don’t realize they’re so stressed, but once they talk about it they realize they are going through something,” says Shepherd. If you think stress is messing with your periods, talk to your doctor; therapy, exercise, yoga, and meditation can all help get your stress under control and your periods back on track.

Frequent skipped periods can be caused by PCOS. “PCOS is a condition in which a patient has an excess of androgens, which are chemicals in the body that affect ovary function, hair growth, weight gain, and sensitivity to insulin,” says Moss.

UP TO 20 PERCENT OF WOMEN ARE AFFECTED BY PCOS.

PCOS can result in anovulatory cycles and irregular spotting. It commonly causes cysts to grow on the ovaries, which, if they rupture or cause the ovary to twist, can cause pelvic pain that feels a lot like period cramps.

Up to 20 percent of women worldwide are affected by PCOS, and it’s more common among women who are overweight or have a mom or sister with by the condition, Moss says. If you think you might be suffering from PCOS, check in with your doctor. While there is no cure, birth control and other medications can help keep symptoms under wraps and get your periods back on track.

7. Uterine Polyps
You might associate polyps with your colon, but the same small benign tumors can grow in your uterus. “It’s an overgrowth of lining of the uterus,” says Moss. Polyps in your uterus can cause cramping and period-like discomfort, even when you’re not on your period.

Because polyps can make it harder to get pregnant, and because there is a small risk they may develop into uterine cancer down the line, your doctor will likely want to remove them, most often with a relatively simple procedure known as a hysteroscopy. During a hysteroscopy, a doctor inserts a long tube up through the vagina and into the uterus. The doctor is able to use the scope to both see and cut out the polyps.

Every month, your ovaries make several cysts in preparation for ovulation, but only one cyst releases an egg. Although the others usually dissipate on their own by the time you get your period, sometimes one cyst or more sticks around.

Cysts can also occur if you have an anovulatory cycle (such as with PCOS). Ovarian cysts often cause no symptoms at all, although they can sometimes trigger period-like pain when you’re not on your period. So if you’re experiencing irregular cramping, talk with your doctor.

“Cysts in and of themselves aren’t usually a problem,” says Moss. “But if they get particularly large, they can cause the ovary to twist—a.k.a., an ovarian torsion—which is painful and requires an emergency procedure to save your ovary.”

Cramping is a common symptom of PID, which is an infection of the uterus, fallopian tubes, or ovaries that typically occurs when sexually transmitted bacteria spread from your vagina to your reproductive organs.

“Sexually transmitted infections such as chlamydia and gonorrhea are the typical culprits of this serious pelvic infection that can lead to pelvic pain and infertility,” says Sherry A. Ross, M.D., an ob-gyn and author of She-ology. “Make sure you’re getting regular STI checks between new sexual partners to ensure you are not a carrier of damaging STIs.”

One common symptom of a UTI is pelvic cramping, Ross says. “Other symptoms include frequency, urgency, and pain and burning with urination, as well as bleeding with urination.” If you think your cramps might be associated with a UTI, head to your ob-gyn or primary care physician ASAP; left untreated, a UTI could turn into life-threatening kidney infection.

If you’ve got PMS-like cramping, bloating, and breast tenderness but no period, one reason may be that it’s not quite time for your period yet—but it’s coming.

German for “middle pain,” mittelschmerz happens about half-way through your menstrual cycle—around day 14 when you ovulate, says Nicole Scott, M.D., an ob-gyn at IU Health. It’s a totally normal experience—affecting about 20 percent of women—and it doesn’t mean anything is wrong, she says. Since it’s just your ovaries doing their thing, there’s not much you can do to prevent it and the symptoms should go away within a day or two but if it’s extremely painful or comes with any sign of infection, call your doc, she adds.

Hitting the gym on the regular is one of the best things you can do to help deal with PMS, but working out too hard or too often can actually mess up your cycle and in some cases make you miss your period all together, Scott says.

All that physical stress, especially if you lose a lot of body fat, can make your period go AWOL and cause abnormal fluctuations in your hormone levels. These fluctuations can cause moodiness, irregular spotting, acne, and other PMS-like symptoms. If you miss your period for three cycles or more in a row, talk to your doctor.

It’s ironic that something so pleasurable can also lead to pain. “Experiencing cramping or pain after sex is completely normals,” says Ross.

The culprit? “Some sexual positions are known to be anatomically harder on the vagina and female organs including the uterus and ovaries,” she says. “For example, doggie style allows deeper penetration but can cause discomfort for many women, while missionary position tends to be easier and more comfortable for women.” Experiment with your partner to figure out which positions are best for your body.

This painful bladder syndrome, which affects women more often than men, can also cause cramping in the lower abdominal area, Ross says.

Also known as “painful bladder syndrome,” other symptoms of interstitial cystitis are similar to a urinary tract infection, including pelvic pain, pain between the vagina and anus in women, pain during intercourse, and a continual strong urge to urinate. The exact causes of this condition aren’t known, but it may be associated with a defect in the protective lining (epithelium) of the bladder, an autoimmune reaction, infection, or allergy. It may also be hereditary.

Miscarriages are much more common than you might thing—every pregnant woman has a 25 percent chance of having a miscarriage, says Ross.

Signs of a miscarriage can include severe menstrual-like cramping. If you’re pregnant and are experiencing severe cramping, contact your doctor immediately.

Endometriosis occurs when tissue that typically grows inside of the uterus, grows outside of it—typically in the pelvic area, which can cause significant cramping, says Ross.

Pelvic pain associated with endometriosis differs from regular PMS pain in that it often shows up days or weeks earlier than typical PMS cramping, and may last for days even after your period is done (so, basically, you have very few pain-free days throughout your cycle). Endometriosis cramping also comes without those other PMS symptoms like mood swings.

The intestinal disorder is associated with recurring abdominal pain or discomfort along with altered bowel habits over a period of at least three months. These can include constipation, diarrhea, or the double whammy—both constipation and diarrhea, Ross says, which, yes, is totally possible.

Ovarian cancer is relatively rare, affecting only about 22,000 women a year in the U.S., but it’s one of the deadliest cancers for women, killing about 14,000 women a year. A big part of this is because it often shows no, or very subtle, symptoms, Scott says.

Missing your period isn’t the most common symptom of ovarian cancer—those are abdominal bloating, urinary problems, weight loss, and pain—but it is a possible symptom, according to the American Cancer Society. So if you’ve missed your period for three months or more or you have other concerning symptoms, call your doc STAT.

In this article:Cramps, Featured, Health and Fitness, Menstruation