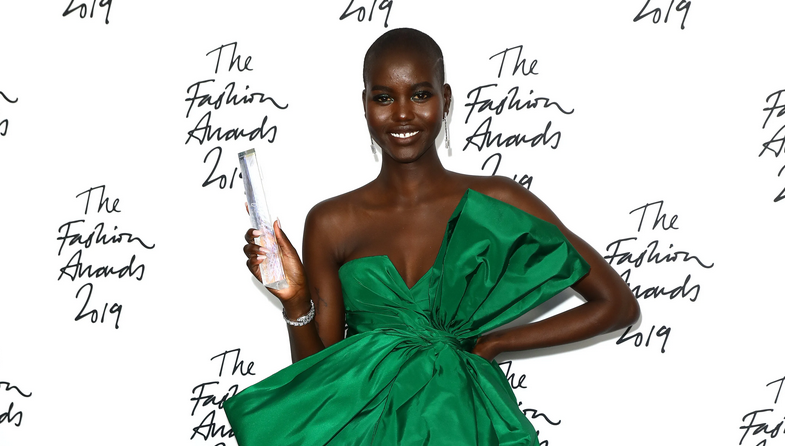 South Sudanese Star model Adut Akech was named ‘Model of the Year’ at last night’s star-studded British Fashion Awards in London, earning her one of the biggest accolades during this year’s ceremony.

The 19-year-old, South Sudanese-born model, beat out the likes of Adwoa Aboah, Kaia Gerber and Winnie Harlow to claim the recognition.

During her acceptance speech, Akech, who moved with her family to Australia as a young girl after fleeing South Sudan, touched on the need for better representation of women who look like her in the fashion industry. “It is important for all of us to remember that someone like me winning this award is a rarity,” she said.

“This is for the young women and men who found representation and validation in my work. I want them to never be afraid of dreaming big like I once did.”

The model has openly called out racism in the fashion industry in the past. Back in August, she called out Australia’s Who Magazine after they published a story about her with a picture of a different model. “I feel as though this would’ve not have happened to a white model,” she said at the time. “Not only do I personally feel insulted and disrespected, but I feel like my entire race has been disrespected,” she added.

According to The Independent, the star model received a standing ovation after delivering her speech. Several artists, models, designers and more attended the ceremony (sometimes referred to as the ‘Oscars of British Fashion), which took place at Royal Albert Hall, including Rihanna who won the Urban Luxe award for her label FENTY, which launched this year. The award was presented to her by Janet Jackson.

Several other fashion icons, including Naomi Campbell, Tracee Ellis Ross, British Vogue’s Editor-In-ChIef Edward Enninful and plenty others were also in attendance for last night’s awards. Check out some more of the action and standout looks below.