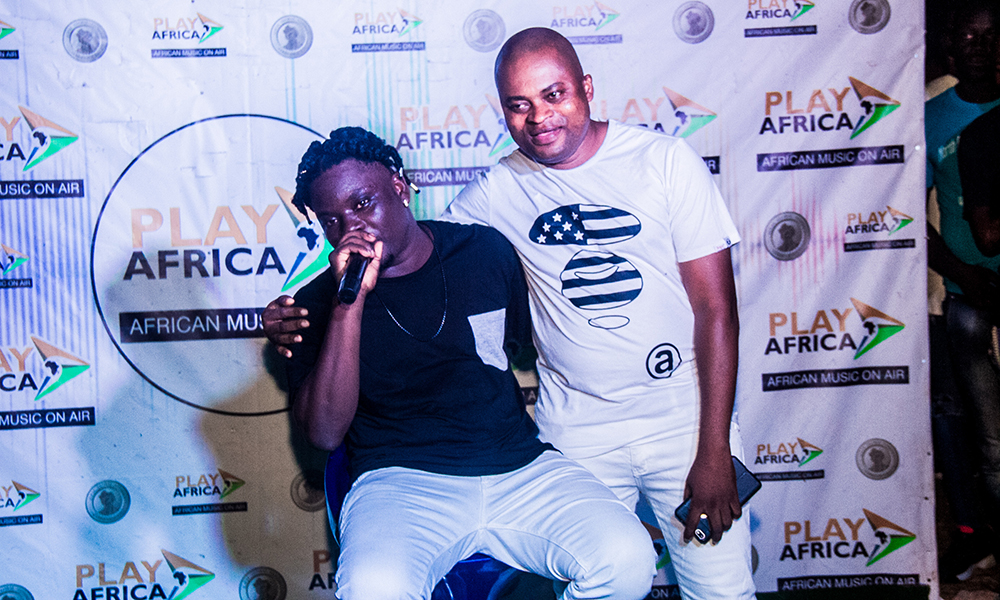 Fast Rising Rapper, Agbeshie, pulled over 5,000 audience in Agbozume at the Play Africa BonFire Night With The Stars on Saturday night, September 15, 2018. It was a day worth remembering; Agbeshie and his huge fanbase at the Southern Volta showed a lot of support for Play Africa Team and their artiste.

Agbeshie’s song ‘God’ which featured Bhimnation signee, Kelvyn Boy is currently No. 6 on the Top 10 of the most Played songs on Play Africa music app and this qualified him to be on the BonFIRE night. The event, which was hosted at Agbozume EP Church Park, is the biggest BonFIRE night so far being hosted by the Play Africa team.

The event manager for Play Africa, Mr. Kay Bentley, remarked that the crowd was huge that they were uncontrollable irrespective of the number of security personnel’s available. “We could not manage the crowd especially when the Play Africa team surprisingly presented a cake to celebrate the birthday of the superstar” Mr. Bentley remarked.

The show due to close at 10:00pm run into early hours of the next day around 3:00am – the crowd were enjoying themselves and wouldn’t go home unless Agbeshie and the other home acts signed to Play Africa app performed for longer hours.

Agbeshie, the “Ewe Rap God’ as the people of Volta called him, shared tears of joy upon seeing the crowd and the love that was shown during the event. His big hit song “Agbozume” has been an anthem in the town and every single person in the town could sing the entire song.

He reveled during the event that he is actually not from Agbozume but rather from Denu but the loved from Agbozume is overwhelming which sometimes makes him question his mum why she did not give birth to him at Agbozume.

During the interactive sessions of the event, Agbeshie noted, “some of the artiste gives out their songs for free due to poor Artiste management.’ ‘There are some managers who lack basic ideas about music industry and this makes us the growing ones live to accept the norms of posting songs for free download.” He also explained that he knows it will be a heartbreaking for most of his fans, as soon and very soon, people can only pay to download songs from musicians. He also explained to the people present that ‘buying my songs from Play Africa shows how much you love me as an artiste and that will give me more funds to do more great music.’

He also explained that he recorded the song ‘God’ because of the surprised award he received for being the Artiste of the Year during VMA18. ‘I am very grateful to God for how far he has brought me and this gave me the inspiration to write and perform that song.’

In the middle of the event, Agbeshie introduced a 14-year-old boy called ‘Kpesese’ who can rap shoulders with most Ghanaian rappers. The infusion of English, Twi and Ewe on his bars and the energy he possesses makes him unique. The event also experienced performances from the talented and best performer at VMA 2018 Nuh Prince and Afeke Foster.

The BonFIRE night with the stars is an event that Play Africa management team is using to educate musicians and music fans about the importance of buying records and the importance of ending free music downloads.

The event was supported by EventicGH, the organizer of Volta Music Awards, Kwamivi Ashiaby aka Ex Doggy.

Play Africa is available on Google Play store and can be installed with this direct link to stream all songs from Agbeshie https://play.google.com/store/apps/details?id=com.playafricaonline.android

In this article:Agbesi, Events, Play Africa