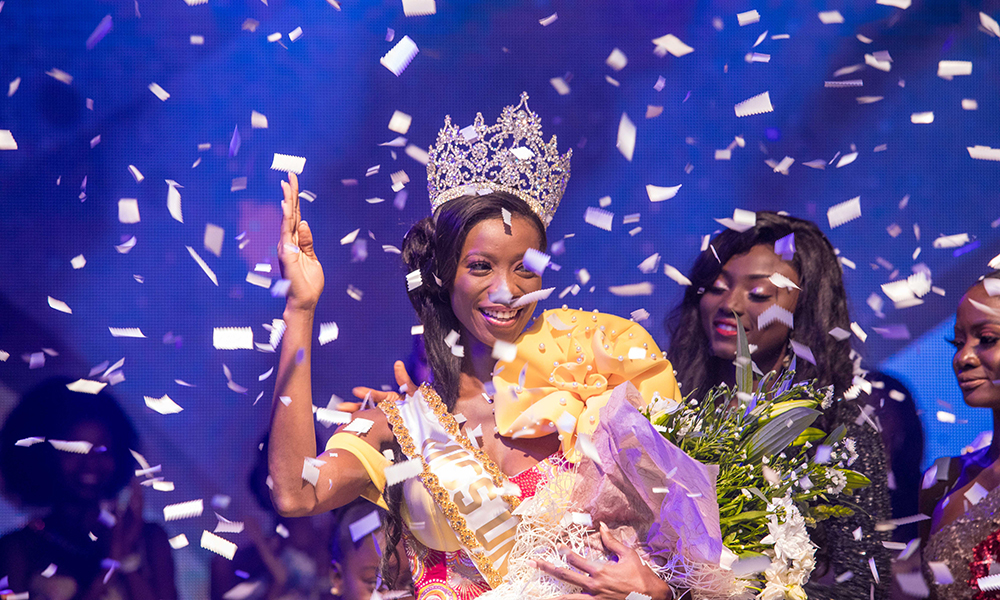 AKPENE Diata Hoggar, a model, blogger and entrepreneur was on Saturday, September 15, 2018, crowned winner of the 2018 Miss Universe Ghana contest held at the plush Labadi Beach Hotel, Accra, in an atmosphere of pure colour and splendour.

Akpene, who is also a Management Information Systems (MIS) graduate, beat nine other beauties in what was described largely as a highly competitive event, to pick the coveted title and the sole ticket to represent Ghana at this year’s Miss Universe international pageant slated for Bangkok, Thailand in December.

She also received a brand new car from 4FK Motorsport which is owned by Ghanaian international soccer star, Sulley Muntari, a five-week leadership programme with YALI (Young African Leadership Initiative), six months publicity and a spread in the Glam Magazine, among other amazing prizes.

The tall and cordial model, who represented the Brong Ahafo Region in the middle belt of Ghana, excellently promoted the tourism sites and cultural heritage of the region, attracting thunderous applause from the obviously impressed audience.

Akpene excitedly expressed her gratitude to MALZ Promotions, the organisers of the event, for their professionalism, and graciously congratulated the other contestants for the healthy competition.

All the contestants put up great performances in the various segments of the competition, promoting the culture and tourism products of Ghana while displaying their individual talents in singing, dancing etc.

Sporting some intricate designs cut and stitched by some of Ghana’s talented designers, the contestants displayed great sense of fashion, intelligence and eloquence as they answered questions from the judges to test their knowledge about various issues in society, after which five were shortlisted to vie for the crown.

The all-round great performances by the contestants made it quite difficult for the five judges to decide the top three from the best five contestants. Indeed, for the first time in the history of the Miss Universe Ghana pageant, there was a tie, which meant that instead of choosing the ultimate winner from the best three finalists, she was picked from four.

The audience, made up of the creme-de-la-creme of the country were serenaded by top Ghanaian musicians, Adina and King Promise, while they enjoyed some fine champagne and a three-course plated meal.

The Noryam Dance Group spiced up the event with some sprightly traditional drumming and dancing that gave the show an authentic Ghanaian touch.

The contestants were clothed by some of the finest designers in the country, including C’est Dora, Quophi Akotuah, Yartel Gh, Saa Dia, and Nhyira. The event was organized by MALZ Promotions, owned by Menaye Donkor Muntari, who is also the National Director for Miss Universe, Ghana.

The Minister of Tourism, Culture and Creative Arts, Mrs Catherine Afeku, the Chief Executive Officer (CEO) of the Ghana Tourism Authority, Mr Akwasi Agyemang, a former Minister of Finance, Dr, Kwesi Botchwey and many Ghanaian personalities graced the event, which was aired live on Joy Prime TV, a media sponsor of the pageant.