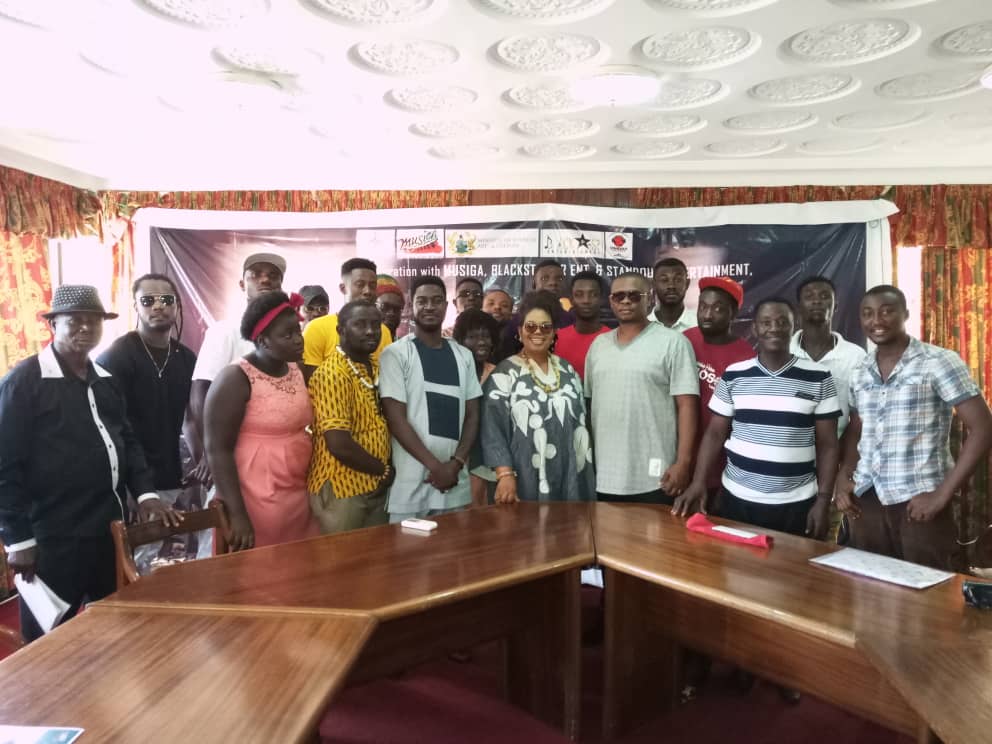 Following the success story in the Volta Region under the Volta Music Project, the Musiga Volta chapter in collaboration with ‘Appietus’ has successfully recorded and released 10x new artist and singles of a 10x track regional Album currently making waves in the region, in preparation towards a regional album launch and fund raising concert set for the 4th of November 2018.

The Seminar was held on Saturday the 20th of October, 2018; at the plush Cape Coast Hotel located at Padu Estates. Appietus and the Central Region Musiga teams ahead of the Seminar arranged a series of Radio and TV Interviews to create the much needed awareness amongst the youth and all stake holders within the central region music industry. Okokroko 96.9 FM, Eagle 87.7 FM, Cape 93.3 FM just to name a few, where some of the Radio stations engaged for publicity prior to the seminar on Saturday. We managed to get a video from the communications team on one of the interviews. Several topics where discussed including the main objective of the Appietus National Music Project and what it means for the 10x lucky musicians to be selected at the later stage within the central region.

Mr. Appiah Dankwah explained that the project will bring about change in Show Business and set the tone for a healthy competition within and amongst all the ten regions where each region will have a Regional Album to promote and market it extensively within the region and beyond to makes waves all over the country. He explained that the move and its success will largely depend on the involvement of all stake holders within the entertainment industry of the Central Region and for that matter all other regions; that is Presenters, DJ’s ,Technical Programme directors ,video directors, fanatics and more. Last but not the least, having that regional agenda to fully support and promote your own products to the rest of the country and the world.

The Chairwoman of the Musicians Union of Ghana Central Region Chapter Nana Ekua Apeatsewah II, popularly known as Queen 1 speaking on the same topic elaborated that the project will initiate an unprecedented agenda for her administration, that is the development and production of the very first Regional Album under her watch as Chairwoman of Central Region Musiga and she is bent on making sure the project will be of a huge success and open opportunities to generate funds through donation and corporate contributions at the launch of the Album Concert slated for a later date after the completion of the selection process, recording and then finally release by December 2018.

Participants where every excited and have huge hopes for a positive outcome from their bidding. Mr Appiah Dankwah in his speech placed emphasise on the importance and significance of the efforts of Queen 1 the Region Chairwoman pushing for the #CMP to be launched second as part of the ‘Appietus National Music Production Project’. Appietus also lauded the regional team for creating and bringing maximum attention and hope to the youth within the region who dream of making a carrier within the entertainment industry.

The seminar saw the attendance of some 60 to 80 people many of them arriving late. However the organisers also gave a grace period of two weeks ,thus till the end of October to allow a lot more people the chance to participate and also normalise their registration status with the musicians union of Ghana Central Regional Chapter. Participation is strictly based on the fact that one must be a registered member and in good standing with the Musicians Union under the Central Regional Chapter to be eligible for participation.

Forms for participation cost Ghc20.00 cedis and the full year registration for Musiga membership is at Ghc114.00 cedis, students are charged Ghc60.00 cedis upon proof of Student Identity card.

Chairwoman of the region, Nana Ekua Apeatsewah II, popularly known as Queen 1, made is clear that all monies collected are directly administered and accounted for by the Central Regional Chapter in collaboration with the head office of the Musicians Union of Ghana in Accra.

Appietus expressed how happy and satisfied he was to see the interest generated by his Central Music Project campaign, and thus it gives him a solid conviction that he is championing a good cause and that he is bringing real opportunities to the door steps of all up and coming musicians across the nation.

After a successful launch in the Central Region the music Mogul Appietus ‘In Da Mix’ and his formidable team will communicate dates for the other regions via future publications .With my observations I will say all upcoming musicians and entertainers in all regions must align themselves to take full advantage of this one time musical production opportunity which promises to launch your entertainment carrier.

Enjoy some of the pictorial moments at the event and watch some of the highlights on the attached footages .For more information and new updates on the project follow Appietus on these social media pages Facebook: appietusappiahdankwah Instagram: appietusmix and Twitter: appietusindamix.