VIDEO: Guru Commence His Hood Tour With An Outstanding Performance At Madina, And Ashongman.

AFRONATION: SMADE Reveals The Secret Behind Choosing Ghana For The Maiden Edition. 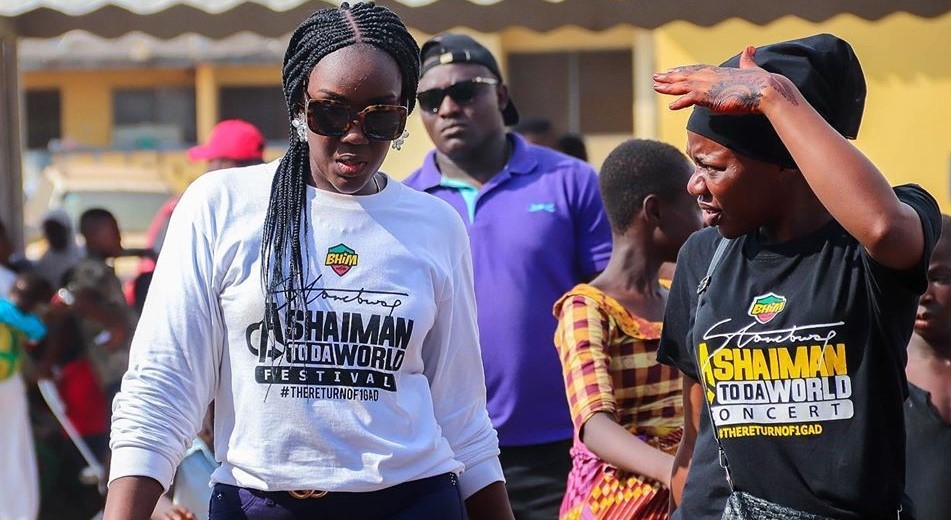 ASHAIMAN, GHANA (www.georgebritton.com) – Prior to the 2019 Ashaiman To The World Festival (ATTWF) sequel, better half of newly minted 3 times AFRIMA Reggae/Ragga & Dancehall Artiste of the Year; Stonebwoy, Dr. Louisa A. Satekla and a non-profitable, and charitable non-governmental organization founded and headed by Livingstone Etse Satekla, The Livingstone Foundation (TLF) have organized a free health screening and campaign to curb and create primitive awareness of health related disorders that can be contracted by humans.

The exercise, which was slated for Friday, 29th November, 2019 successfully witnessed and screened over 2000 residents of Ashaiman and Ghana at large at the Mandela Park (Kaketo). Natives who trooped in were screened for diseases such, HIV/AIDS, poor vision, dental and other basic health screen that will practically cost a patient at public or private health facilities. Drugs were provided for natives that had some unhygienic results, they were also educated on the risk factors of contracting minor and deadly diseases, the importance of early detection and treatment as well as self-examination.

The Livingstone Foundation’s (TLF) health screening and awareness campaign is part of the organization’s health care project that has the objective of providing basic health care for both the underprivileged and privileged. Its a first-rate activities/events that brought professionals and social networks across the world to create awareness and fight against health related disorders, and also giving back to society for their humongous and steadily support thrown behind the Ghanaian celebrated Reggae/Ragge & Dancehall Artiste, Stonebwoy.

There are about 1.38 million new cases and 458 000 deaths from poor health condition each year (IARC Globocan, 2008). Most cancerous disease is by far the most common in both men and women worldwide, both in the developed and developing countries. In low- and middle-income countries the incidence has been rising up steadily in the last years due to increase in life expectancy, increase urbanization and adoption of western lifestyles. The majority of deaths (269 000) occur in low- and middle-income countries, where most citizens are diagnosed in late stages due mainly to lack of awareness on early detection and barriers to health services. A situation that can be reverted if adequate public health programmes are put in place.

However, Speaking in an interview with Gerrard-Israel, Dr. Louisa stated that the free health care screening was a chance to raise awareness about the importance of detecting early health related disorders, make a difference, spread the word about mammograms, and encourage communities, organizations, families, and individuals to get involved.

She added, the screening exercise was an effort to reduce the stigma of virus and cancerous diseases through early education on symptoms and treatment, explaining that, greater knowledge will lead to earlier detection of such diseases, which is associated with higher long-term survival rates.

Dr. Louisa also revealed that, the free health screening will go a long way live and serve the community as far as the Ashaiman To The World Festival is concerned, adding that, the foundation is arraying some mechanisms to initiate and replicate this worthy course in other regions in Ghana.

Prevention is better than cure and Dr. Louisa Satekla therefore encouraged early screening for health related diseases and is keen on using her platform to provide help centres for patients and survivors as part of her mission to improve health care in Africa. Since its inception, the Livingstone Foundation has piratically and significantly improved and impacted lives of many and plan to extend their support across Africa.

Reiterating his wife’s submission, Livingstone Etse Satekla stated that, this free health screening is sane and will continue to embed a sense of positive health care on the mind of the natives. He extended a profound gratitude to natives, Municipal Chief Executive, the Ashaiman Police Department, BHiM Nation, waste management company, Zoomlion Ghana Limited, media houses, Doctors and other notable dignitaries that were present to make this remarkable initiative a success.

Stonebwoy is set to stage the 6th edition of his annual Ashaiman to the festival, slated for 30 November, 2019 at the iconic Sakasaka park, Ashaiman at 5:00 pm.