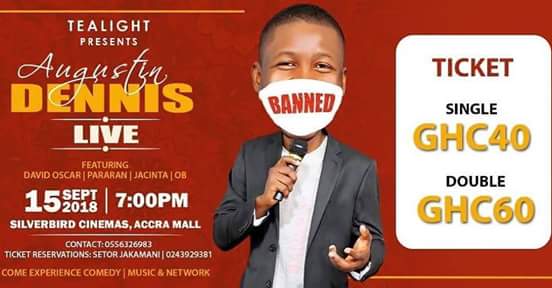 September is officially the month for comedy this year. The month is packed with lots of comedy activities which I believe many people would be interested in attending.

From shows such as Comedy Express, Laugh Kitchen, Glo Laffta Fest, Laughline and Banned, September is going to be a hilarious month.

Augustin Dennis, Ghana’s finest comedians and one of Ghana’s comedy exports has set his stage to perform his one man show he calls “Banned”.

According to him, banned is going to be a platform he would use to tell his side of the story involving the issue of his being banned from performing on any GH Comedy platform.

The issue of him being banned sparked a few controversies here and there but he wants to use the show to clear the air. It is a comedy show, so definitely it is going to be a very funny narrative by him.

Banned isn’t going to be just a comedy show, but also an art exhibition and Music. There would also be a session set aside for networking.

Supporting Augustin Dennis on the night is Jacinta, OB, David Oscar and Pararan. Venue for the event is the Silverbird Cinemas, Accra Mall. Ticket is a cool GhC 40.00 single and GhC 60.00 double. The date is on September 15. Augustin Dennis Live is proudly presented by Tealight.

In this article:Augestine Dennis, Banned, GH Comedy, Laugh sure