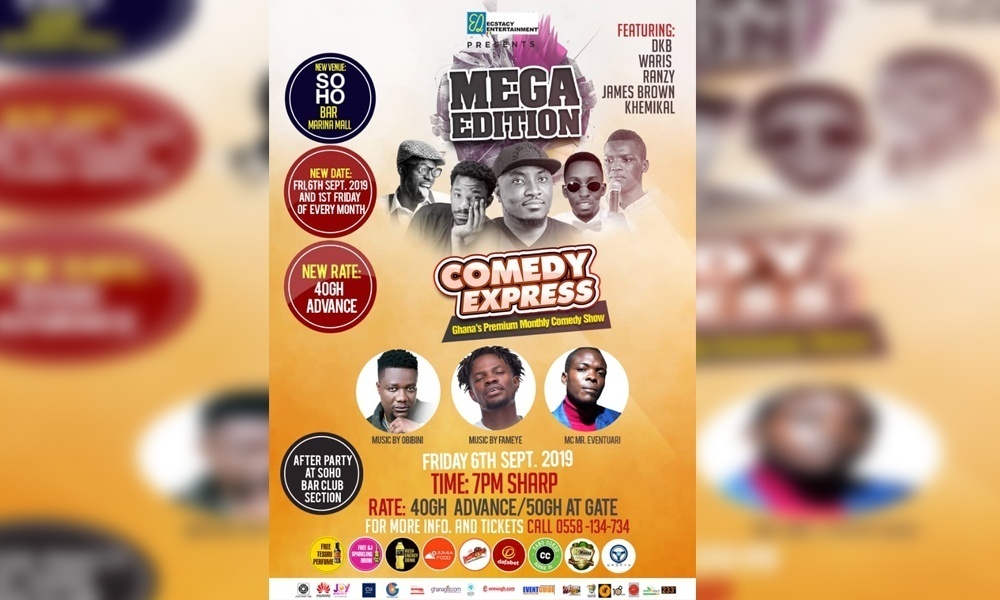 Your much loved monthly comedy show, Comedy Express is coming again to you this tome bigger than what you experienced last month. There has been a slight change to what patrons are used to. With this edition, date and venue have been changed. Comedy Express is known to be held every first Saturday of every month, this time around, it is the first Friday of every month to make easier to attend after work. The venue has also been moved from Cockpit Lounge & Bar inside the Achimota Mall to SOHO Bar inside the Marina Mall for a new experience.

The next edition, holding the fort as MC would be Mr. Eventurarry. Everyone is to expecting nothing but hilarious delivery as he would be your host. He is also there to take your sorrows away “for the vanishing”. Also performing on the night is DKB, Comedian Waris, Comedian Khemikal, Id James Brown and Ranzy. There would also be musical performances from prolific rapper Obibini and “Notin I Get” hit maker Fameye.

The show comes off this Friday, September 6 2019 at the SOHO Bar inside the Marina Mall. Tickets are going for a Cool GhC 40.00 advance tickets and GhC 50.00 at the gate. For more information on the show and tickets contact 0558-134-734. There would be an after party inside the SOHO Bar club section. You wouldn’t want to miss that.