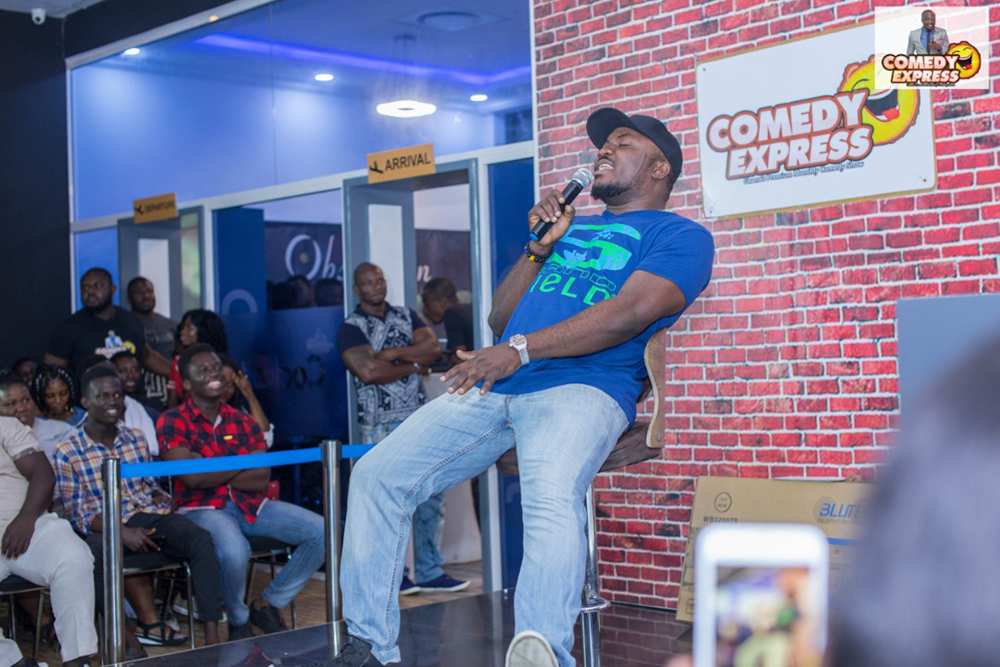 It was a fun and exciting evening, filled with hilarious rib cracking jokes that would tickle you for a life time. Comedy Express was the place to be last Saturday and once again it has made another staggering record. The venue, Cockpit Bar and Lounge saw a mammoth crowd troop in to enjoy their fair share of GhComedy.

It was a wonderful sight to behold as a large number of people were seen standing to catch and enjoy the comedians perform. The Lounge was filled to capacity to the extent that, the reserved seat for VIPs and VVIPs were also filled that some patrons holding these tickets, had to also stand. Reserved chairs were also filled. Could the heavy patronage on Saturday mean, Ghanaians have come to accept GhComedy?

Derick Kobina Bonney, known by many as DKB, was overwhelmed by the number of people that turned up for the event. Speaking to him, the comedian spoke about how humble he was upon seeing such a large number appear for monthly comedy show and emphasized that GhComedy has come to stay.

“I was overwhelmed by the turn out, I wasn’t expecting such a huge turnout. The place was filled to the capacity that people had no option than to stand and enjoy the show. TVs which were installed for VIP ticket bearers had to be the solution for those who were standing to enjoy the show as Almost half the size were also outside waiting to get in.

The comedians on the night did extremely well, they were excellent and I am proud of them. After what happened on Saturday, I am fully convinced that Ghanaians have come to accept us [Comedians], and we are not going to let them down.” He said.

On the night, there were amazing gift prizes to be giving out to patrons of the show. A TV was won by a campus promoter and a brand new mobile phone was won by a lady. There were also free betting vouchers which were won by a footballer who was in the audience. All these items were presented by Soccabet. 2 lucky Fans who laughed the hardest during the event were also giving a bottle of perfume from UDY Paris.

There were performances from Comedian OB, Lekzy DeComic, MJ The Comedian, Ajeezay, Comedian Waris, Sportoo, Percy and Putogo. Each of these comedians had an excellent night and I am sure they’d gradually be household names.