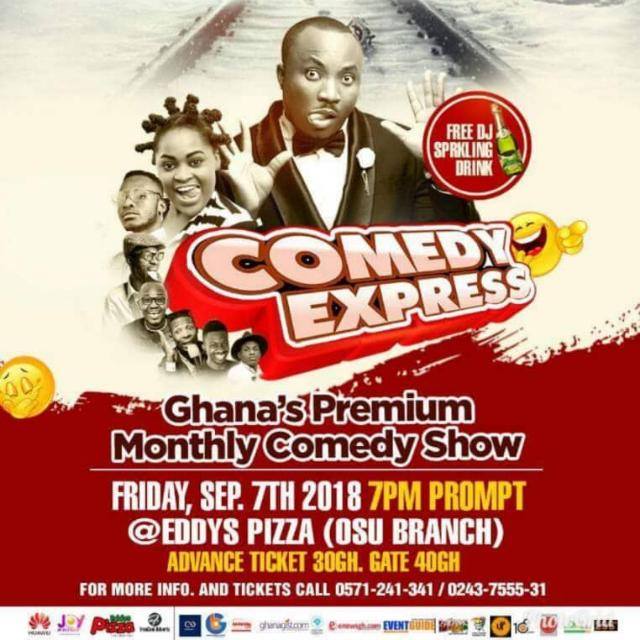 The comedy show which has seen amazing performances from Gh comedians is one of the go to comedy clubs in the comedy history of the country.

Having a slot on the TV, the comedy express show has helped piqued the interest of comedy in the country. Many have warmed up to the performances of the comedians as very hilarious as to popular beliefs in the past when everyone was singing the chorus “Ghanaian comedians are not funny”.

The show has seen many celebrities pass through to have a good time;

Performances are also top notch from the comedians billed to perform. With each passing show, the comedians out do themselves with thrilling showcase of talent which leave a mark on patrons.

For the next show, billed performers on the night are the King himself, DKB, he would be supported by Jacinta, Lekzy DeComic, Comedian OB, Comedian Waris, MJ TheComedian, Sportoo and Putogo.

Patrons are to expect nothing but fireworks come Friday, September 7.

Venue is the Osu Branch of Eddy’s Pizza. The rate for the show is a cool GhC 30.00 for advance tickets and GhC 40.00 at the gate and show starts at 7pm sharp.

Participants would also receive souvenirs from Huawei Ghana and also get a free DJ Sparkling champagne. For more information about the show, call or whatsapp 024-375-5531 / 057-124-1341.

Comedy express also airs on Joyprime as a TV show that plays back all performances at the comedy express event. Don’t miss this show for anything. Hurry, get your tickets and come and join in the fun with your loved ones.