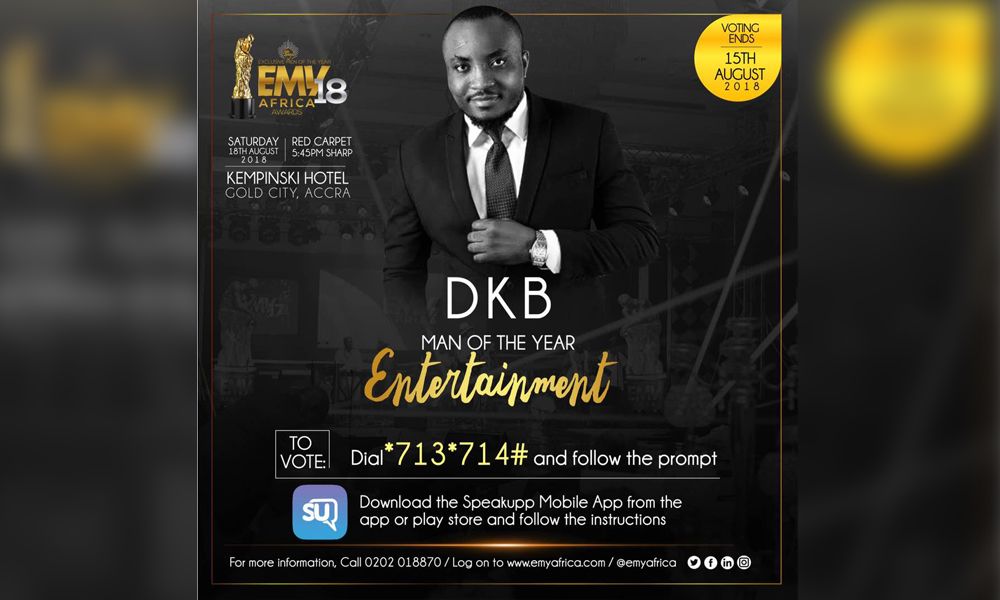 EMY (Exclusive Man of the Year) Africa Awards is aimed at celebrating exceptional and distinguished men in Africa who have excelled in their fields of endeavor. The award scheme in its previous 2 years has been excellent and in its 3rd year, promises to be bigger.

Yesterday, nominees were announced and King of Comedy DKB was nominated in the category Entertainment Man of the year. He is in the category with Stonebwoy, Akwesi Boadi “Akrobeto”, Latif Abubakar and Abdul Salam.

“It’s a great honour done me, I feel very proud of how far I have taken comedy in Ghana. I will like to use this opportunity to thank every Ghanaian who has made time to watch us perform, appreciated us and criticized us. It’s a one bundle of direction to our perfection.” DKB said.

The unveiling of nominees saw in attendance, popularly personalities like Joselyn Dumas, Selly Gally, Salma Mumin, KOD, Nana Adwoa Awindor and Big J Cartel of Praye fame among others. The EMYs event is scheduled to take place on August 18. Voting of your favourite personality ends on August 15.

To vote for DKB, *713*714# and select “DKB”, a vote cast costs only 80pesewas or download “Speakup Mobile App” from playstore or app store, register and choose DKB.

Comedy Express TV show on Joyprime airs every Thursday 7:30 pm where DKB plays a lead role in performance, also there is Comedy Express event that happens first Friday of every month at Eddy’s pizza-Osu where content for the TV show are curated from. The August edition of Comedy express is slated for 3rd August. Tickets are going for GhC 30, contact 0571-241-341.

In this article:Comedy, DKB, Events