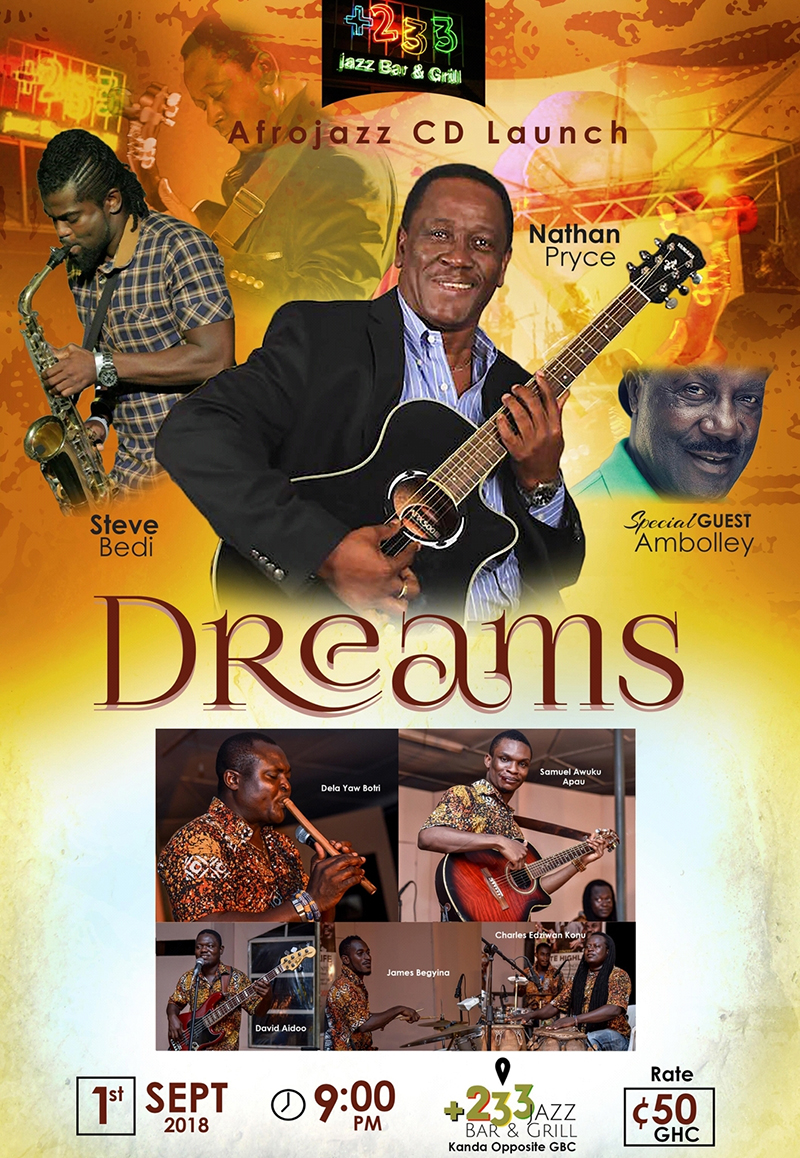 It had been a long-held dream of United States-based Ghanaian Afro-Jazz guitarist, Nathan Pryce, to record an album of his unique brand of fusion music.

That cherished hope has finally been fulfilled and the album, a six-track collection called ‘Dreams’, featuring flutist Dela Botri and the Hewale Sounds, will be launched on Saturday, September 1 at the +233 Jazz Bar & Grill at North Ridge in Accra, Ghana.

Songs on the album are a pristine mix of highlife, smooth jazz, and Ghanaian traditional music. They are approaches that grip Pryce and he has blended them into a sweetly digestible fare.

“There’s so much one can do with our musical resources. We just have to be open-minded and embrace appropriately useful shades from elsewhere to capture wider audiences,” says Pryce who is also a business owner and technology expert in the United States.

The standout track on the album is obviously ‘Sit By Me’, Pryce’s take on Paapa Yankson’s famous ‘Tsena Minn Kyen’ piece.

The new interpretation of the classic highlife song kicks of with some clean Yaa Amponsah-style guitar pickings by Pryce which call in Dela Botri to weave in and out of the track with dexterity on his Atenteben flute.

The smooth jazz element on guitar and the steady percussion spice push the track to a completely fresh level of appreciation. Pryce said he had always admired Dela’s handling of the small bamboo instrument and enjoyed working with him to give a new lease of life to Paapa Yankson’s song.

One of the other songs on the album is a version of Earl Klugh’s ‘Cry a Little While’ which Pryce calls ‘Su Kakra’. Klugh and Pryce are good friends and the latter felt it was an honor to bring a different, more Ghanaian feel to the composition of the man who inspired him to take up the guitar.

Lovers of music keen to hear what new directions Ghanaian popular music is going will definitely appreciate the material on the album and more Pryce offerings at the show.

Guest players at the 9.00pm launch programme will be Gyedu Blay Ambolley and saxophonist, Steve Bedi.

In this article:Afro-Jazz, Album, Event News