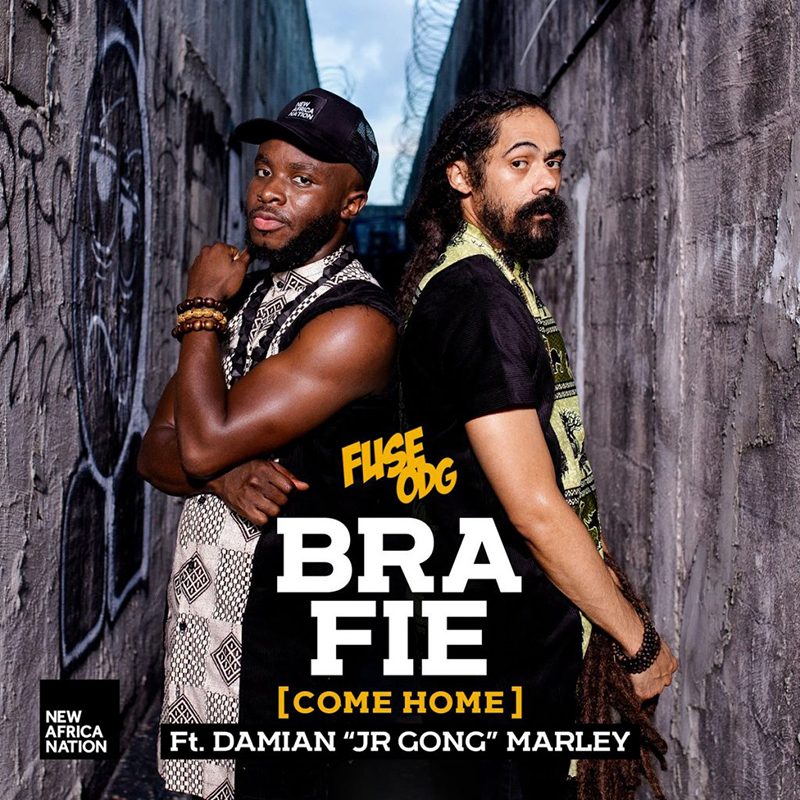 After becoming the first Ghanaian to win a Grammy earlier this year for his contributions to Ed Sheeran’s ‘÷’ album, Fuse ODG is back once again with his new track ‘Bra Fie’ (Come Home) ft. Damian “Jr Gong” Marley.

Produced by Yr$ Truly & OTWoode, ‘Bra Fie’ is a unifying call to all Africans… be they Afro-caribbean, Afro-american, Afro-british…to come home. Fuse expands.. “Bra Fie means ‘come home’. There’s a changing tide that we have as Africans right now. People are paying attention.

We’re here, but what are we doing with this attention. Let’s use this momentum so that we can see something tangible. It’s time for us to get together, not just physically coming home to Africa the motherland, but mentally let’s go back to a place where where we used to be kings and queen, where we used to love ourselves,. Let’s go back to that point and start from there. Right now we are just fighting each other, we need to love ourselves enough and then we can love and treat each other with respect”

‘Bra Fie’ (Come Home) see Fuse collaborate with his long time hero Damian “Jr Gong” Marley. “Damian is on a similar mission. He’s a voice for the Caribbean and for Africans living outside of Africa. Having him on the record was so important, especially for all the work that he’s done before such as his album ‘Distant Relatives’ with Nas. There’s a sense of separation between Africans, Caribbeans, African-americans, African British, it’s time to wake up and rediscover ourselves.” says Fuse.

‘Bra Fie’ is taken from Fuse ODG’s forthcoming album ‘New Africa Nation’ (released February 1st 2019). On it he aims to build upon his debut album album’s achievements by creating tangible results. Fuse is passionately engaged in helping African people to spread word of their culture by prospering in creative endeavours that include a record label, a music festival, a fashion brand and even children’s toys and books. By connecting with the international community, Fuse believes that those cultural roots will inspire investment and tourism from the world-at-large.

Fuse ODG’s debut album ‘T.I.N.A. (This Is New Africa)’ opened a dialogue to present Africa as it really is: a vibrant, scenic and community-orientated continent full of opportunities that’s a world away from how it’s portrayed by the mainstream media. Assisted by the viral hit single ‘Azonto’, Fuse ignited debates in some of the world’s most prestigious universities and raised awareness all over the globe. The album also cemented Fuse’s status as the pioneer of the Afrobeats sound. Mixing the irresistible rhythms of the original Afrobeat genre with rambunctious production and a bold pop sensibility, Afrobeats is a sound that feels at home in London as it does in Lagos or Accra. It’s a genre that’s gained traction in the mainstream with Diplo, Major Lazer and Beyoncé all releasing music that reflects its energy and vibe. Meanwhile, its previously underground stars such as Wizkid and Davido are bigger than ever before, while UK stars such as J Hus fuse the genre with grime breaking new boundaries. It even inspired Ed Sheeran, who co-wrote the ‘÷’ album track ‘Bibia Be Ye Ye’ with Fuse while visiting his projects in Ghana.

Fuse ODG is also working on the ‘T.I.N.A. (This Is New Africa)’ Music Festival. He plans to unite artists from Africa and the wider diaspora to perform live in Accra, Ghana on January 4th 2019. Details to be announced soon.

Outside of music, Fuse’s current social initiative is to expand upon the primary school that he built in Akosombo, Ghana in conjunction with the Wood World Missions. He has acquired land on the same site and is the process of developing a secondary school, and the longer term goal is to also build a university to help local children achieve their full potential.