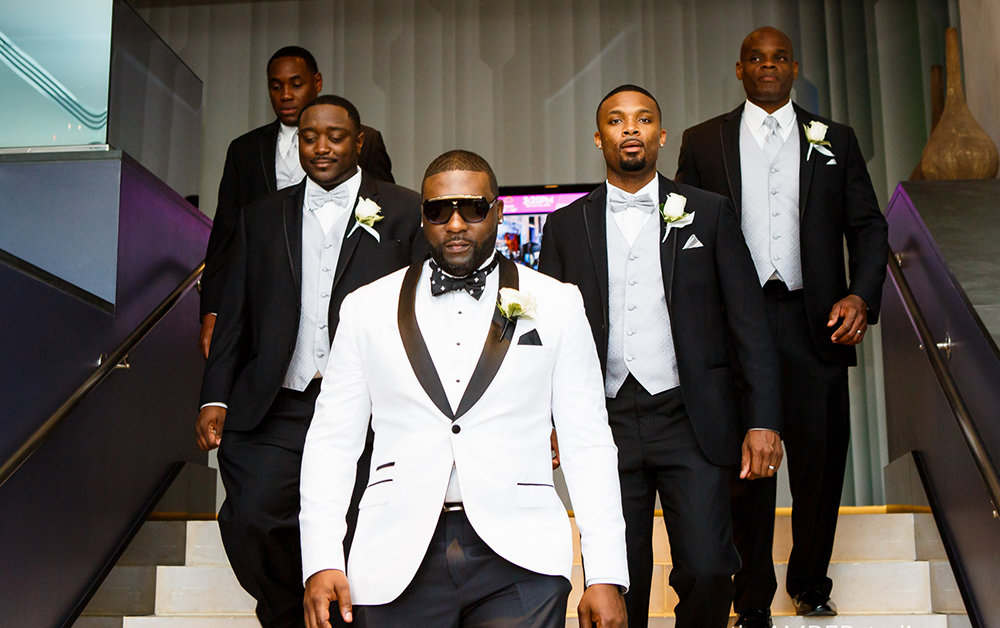 In our regular series we team regular guys on the street with menswear experts to get advice on how to dress for tricky situations. Here, IT manager Ademola Babasanya, 44calls on style guru Alex Field from high-street outfit Reiss for some rules in wedding dressing.

I can’t be the only one whose friends’ children are preserved in chrysalises of nostalgia. For years I’d watched my friends get married and spawn offspring, but I’d never considered that their kids might fancy getting hitched, too. So, when the invitation to my friend’s daughter’s wedding slopped onto my doormat, it wasn’t just an ‘invitation’, it was a memento mori. Was I terrified? Slightly.

The first thing I needed to do was find a new suit, one that would convey distinction without betraying my great age. The language of tailoring is one I’ve never fully understood; I’d fudged formal wear for 44 years, but my transition into the next generation of wedding guest – the-friend-of-the-father-of-the-bride – served as a wake-up call. It was time for an education.

The pinstripe option I had knocking about wasn’t going to cut it and my attempts to find a replacement had proven futile. My son’s lungs still haven’t fully recovered from the time he found me wrestling a pair of skinny-fit trousers from my hulk-like frame in the sweaty caverns of Topman Oxford Street, such was the hilarity. My wife has expunged the episode from her memory, such was her trauma too.

Thankfully, Reiss stepped in to help. “The most common mistake that people make when dressing for a wedding is the fit,” says Alex Field, head of menswear at the high-street store. “A lot of shops now offer on-site tailoring services so there’s no excuse for baggy trousers or for wearing your cuffs down to your knuckles”. And forget matching your tie to your pocket square – “too matchy-matchy,” he says.

Alex sees my pinstripe and raises me a check. I bristle at the thought, but Alex promises me it shows “sartorial flair”. So too does the double-breasted jacket – new territory for me but not half as mafia boss-style as I’d imagined. I then lose Alex to a well-intentioned but slightly confusing discourse on ‘notch’ and ‘peak lapels’. He settles on the former: “more versatile, less formal,” apparently.

With this oracle at my fingertips, I take the opportunity to settle one of formal wear’s long -held debates: to waistcoat, or not? “I don’t feel like they’re as on-trend as they used to be,” Alex admits, “and you might end up being mistaken for the groom if you wear a three-piece”. Case closed.

Alex kits me out in the type of suit the Prince Charles might wear if he were born thirty years earlier and out on the razz in Windsor: a fairly classic suit with a trendy, 21st century finish. The check – almost a ‘pin-check’ – doesn’t quite qualify as his namesake Prince of Wales weave and I imagine the Duchess of Cornwall would balk at the slim leg and lapel. It’s certainly not Savile Row but it is 100% wool and therefore feels far more princely than it does Primark.

But where on the princely-Primark spectrum do I actually sit? To get a response, I turn to that well-trusted and wholly verifiable barometer of truth: Facebook. I upload a photo to the few family members and innumerable strangers that comprise my online ‘friends’ and wait patiently. Years of silence are broken within minutes. ‘Swaggerlistic status,’ comments an old colleague and ‘Lord of the Manor,’ another: both totally ironic jabs that do nothing to quell my angst.

With the wedding but weeks away, I’m still yet to confirm whether the suit is a success. I doubt I’ll be mistaken for the groom. More likely, unwitting guests will assume – wrongly – that I am the ‘Lord of the Manor’ and spend the evening trying to wring me for drinks. With that in mind, I’ll keep my fusty old pinstripe number to hand – consider it damage limitation.