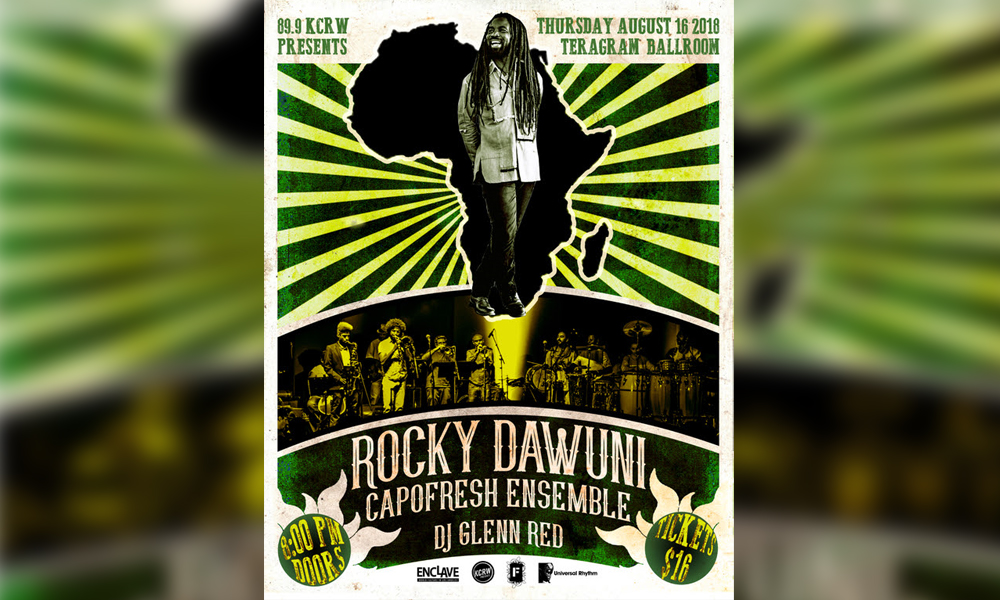 GRAMMY nominated musician and activist Rocky Dawuni, will be live for the first time at the Teragram Ballroom on Thursday, August 16, 2018 with an incredible group of musicians and special guests. Fresh off his headlining show at Africa Oye’ in Liverpool, UK, the Ghanian artist is thrilled to bring his signature “Afro Roots” sound back to Los Angeles.

Rocky is currently putting on finishing touches on his much anticipated 7th album entitled “Beats of Zion” which is set to be released in early 2019. The first single from the album, “Burn One” was recently featured on tastemaker radio station KCRW as their “Top Tune of the Day” and is available for sale now on all platforms. “Burn One” was also just heard on on the TNT hit drama series “Animal Kingdom.” Another forthcoming track from the album “Let’s Go” is the theme song for Cadbury Canada’s Bicycle Factory Campaign 2018 and the beautiful 360 degree video fro the song has already reached over 1.3 million views!

Check out the brand new sizzle video of Rocky at Africa Oye’!! https://youtu.be/RvL3lIwWyF8

Capofresh: Capoiera, is a movement of resistance. Fresh, pays homage to hip hop, the voice of the people. Together we honor our Ancestors. We are Extra Ancestral.
https://www.facebook.com/Kahlilc33

Deejay sets by:
Glenn Red (Afro Funke’ / La Junta )
Known primarily for his work as half of Santa Monica’s legendary Afro Funké Sound System and one-third of beloved afro-latin deejay/producer collective, La Junta, GLENN RED quietly continues to forge a loyal following among fans of eclectic music, steadily rocking crowds in the city’s most respected venues alongside the finest selectors and musicians from around the world. With the sincere music of passionate artists as a common thread, his deejay sets weave fluidly through time and across genres, connecting the traditional sounds of Africa and the Americas with their modern expressions around the globe.

Please DO NOT miss this incredible line up of amazing international talent!!

In this article:Entertainment, Events, Rocky Dawuni