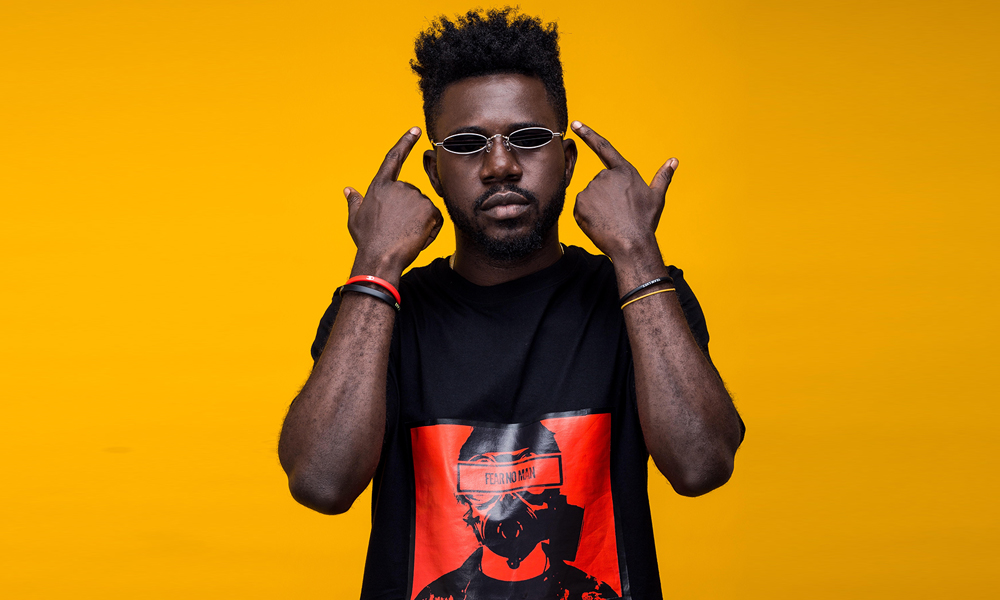 Meet, Prince Boamah Kuleape, who is most famously known as Kulaperry, the CEO of Kulaperry Outlook.

Kulaperry started the “Kulaperry Outlook” brand because he was sad and worried that the African continent didn’t really have any popular clothing brand available for its people. He says, “It always hurts seeing my people wear second hand clothes”. He says that prior to him starting this brand many wrote him off since clothing brands in Ghana in the past usually came up with a few T-Shirts, which lasts a few months and vanish into the thin air. Kulaperry boldly says, “Fear No Man is here to stay”, he continues, “Fear No Man is for me, you and the whole of Ghana and Africa. Fear No Man is bigger than Kulaperry”. The confidence alone of this young entrepreneur is one to admire.

The Kulaperry Brand has already made itself a brand name to reckon with in the Urban African fashion industry. Despite being a young company, with about five years under its belt, the milestones, which the brand has achieved, can only be envied. The company’s apparel includes T-Shirts, Shirts, Caps and Jackets amongst others. The brands presence in 29 different countries is unprecedented, and this is testament to the hard work that has gone into planning, setting up and marketing this amazing brand.

There are plans to extend to more countries in the near future. Its an incredible feat considering the fact that the “Fear No Man” brand which is the flagship brand of the company “Kulaperry Outlook” launched barely 2 years ago. Asked how he was able to reach all these countries in such a short span, he pauses for a second and says, “The internet. The Internet. Social Media” He explains that its incredible how powerful the Internet is in helping businesses and brands in todays world. He further explains that the Internet offers young entrepreneurs the opportunity to reach a much bigger audience and customer base. He urges other entrepreneurs to take advantage of the Internet and social media seriously and build a brand for themselves.

On working with artistes he explains that nothing beats an artiste’s brand than having a personal stylist that gives him a look that his fans recognize him by immediately. Putting on the same clothes others put on does not necessarily achieve this in the long run, and this is another reason why the Kulaperry brand is unique. Where most designers would go out to boutiques to find clothes for their clients, Kulaperry Outlook has the clothes clients need. He believes that fashion is more than just a statement, but an extension of who you are as a person.

It’s incredible the personalities who for the love of the brand wear the “Fear No Man” apparel and post it on social media for free. Some of these celebrities have millions of followers on social media. Most celebrities usually have to be paid before they promote a brand but fortunately for Kulaperry he doesn’t need to do all that.

Kulaperry says that, “They just do it for the love of the brand, they believe in my vision”. Celebrities such as Bet award winners (Sarkodie and Stonebwoy), Patoranking,Mr Eazi, Benard Sokpe (Mister Meister), TeePhlow etc. are constantly seen wearing the “Fear No Man” brand and flaunting it on their personal social media accounts. He spoke about Kelvin Mensah popularly know as “PJKev” an American born Ghanaian who owns a Luxury Private Jet Business and works with A-list American celebrities like French Montana, Justin Combs (Son of P. Diddy) and many others.

Kulaperry says that Kelvin who has all the luxury brands in the world at his disposal and access to all these American celebrities still chooses to wear the “Fear No Man” shirt and gives him credit on social media. A move he says saw an increase of almost 40% in sales in the US. Kulaperry has also collaborated with several widely acclaimed brands. His collections have been on display on fashion stages in different countries.

Quite recently Forbes valued Kyle Jenner’s makeup kit brand and one of the things that was interesting to note was how few her employees were. Kulaperry’s business empire employs just seven full-time workers, two photographers (Focusghphotophy, Imphotography & 9thwaverhyme) and four models. He has two business managers who handle the company’s local and international affairs and one international lawyer in charge of all legal affairs.

The “Fear No Man” brand in its almost 2 year span has sold almost 10,000 of the “Fear No Man” apparel. The least expensive product goes for $25 and the most expensive $500. “Fear No Man” has racked in earnings estimated to be $180,000 over the course of 2 years. We estimate the “Kulaperry Outlook” brands total value to be a little over $250,000 as of July this year. Kulaperry thus becomes the youngest CEO in fashion in Ghana to reach a quarter of a million in earnings. Its safe to call the Kulaperry brand a million-dollar brand. This is black excellence at its finest.

Recognition and awards mean a lot, as it helps boosts a brands reputation and is evidence of how much work has been put in. Kulaperry was recognized at the Young Achievers Summit Awards 2018, as the “Overall Entrepreneur of the year 2018”, and the “Fear No Man Clothing” collection was also recognized as the “Emerging Brand of the year 2018”. Add these to the “Revelation of the year (Fashion)” award he won at the Africa Youth Choice Awards, and we are discussing greatness.

Speaking to Kulaperry it’s easy to see why he has been able to achieve all of this. He is simply a young man with a dream and a vision. He is a focused young man who knows exactly what he wants and is willing to do whatever it takes to get it. He is one of the few Futuristic young people out there.

Asked about challenges he faces, Kulaperry explained that at this point the major challenge the brand faces is trying to meet demand. He says the brand is under a lot of pressure from customers all over the world. He says the company is however working hard to increase its production.

The young entrepreneur has succeeded where many have failed, and is still yet to reach half of his potential and target. Many have touted him to be the next Virgil Abloh. He is humbled by this comparison and maintains that he wants to be known as the one and only Kulaperry. Kulaperry Outlook is definitely going to be bigger, if this upstart and accolades are parameters to go by.
Plans are underway to launch a limited edition 24-karat gold thread and button denim jacket, which will be sold at $5,000 a piece in aid of charitable organizations and causes. Kulaperry says he sees the brand becoming a household name for Africans and having its own chain of fashion retail stores all over the globe such as Zara SA. He is one of the few futuristic entrepreneurs of this generation. It’s only a matter of time until he appears on the Forbes list.

This is the future of fashion and style made in Ghana for the world.

Kulaperry is rising fast, and like age, he is most unlikely to ever fall.