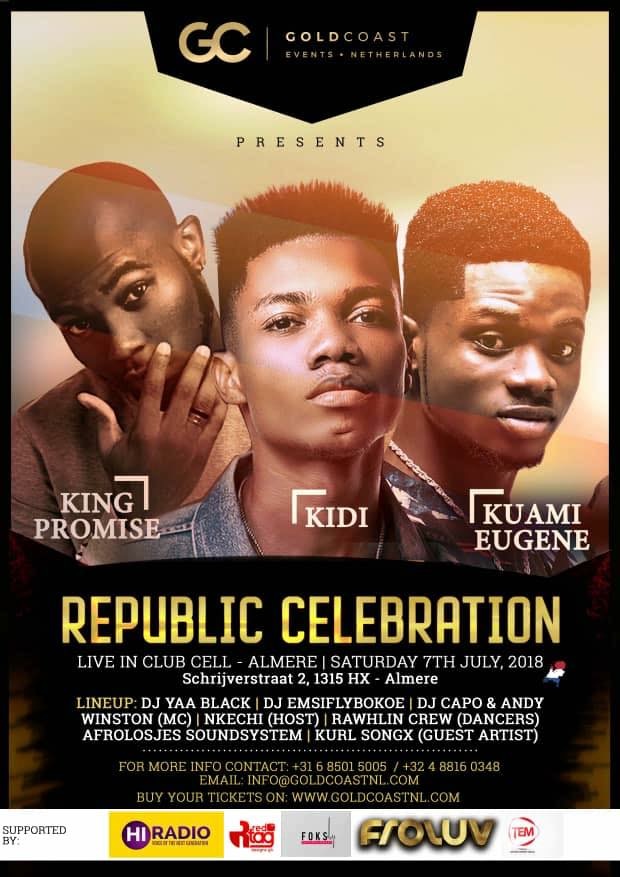 Lynx Entertainment has cancelled the performance of signed artiste at Amsterdam and Brussels, an event they were headlining alongside King Promise due to an impasse between the record label and event organizers, our deep throat sources reveal.

Gold Coast Events, the organizers of the Republic Celebration, which was slated for the 7th of July  at Almere and Antwerp has been hit with the biggest setback as the record label of two billed artiste; Kuami Eugene and Kidi pulled out their artiste a week to the event. The cause of the decision is said to be the record label and event organizers inability to reach an agreement and iron out some issues relating to the event.

Though an official statement from the record label and event organizers is yet to come out detailing the issues, Kidi took to his social media page to apologize to the fans and to announce the decision of the record label.

He wrote “Can’t be at Brussels and Amsterdam for the Republic celebration, unfortunately. Apologies to the fans, we will definitely meet soon tho. In the meantime, London see you on the 14th July for Party in the park.”

Notwithstanding the pull out of the Lynx entertainment artiste, King Promise is still on the bill and open to perform, but the hurdle we foresee is organizers cancelling the event for fear of king Promise alone not being able to fill the event venue hence resulting in loses for the event organizer.