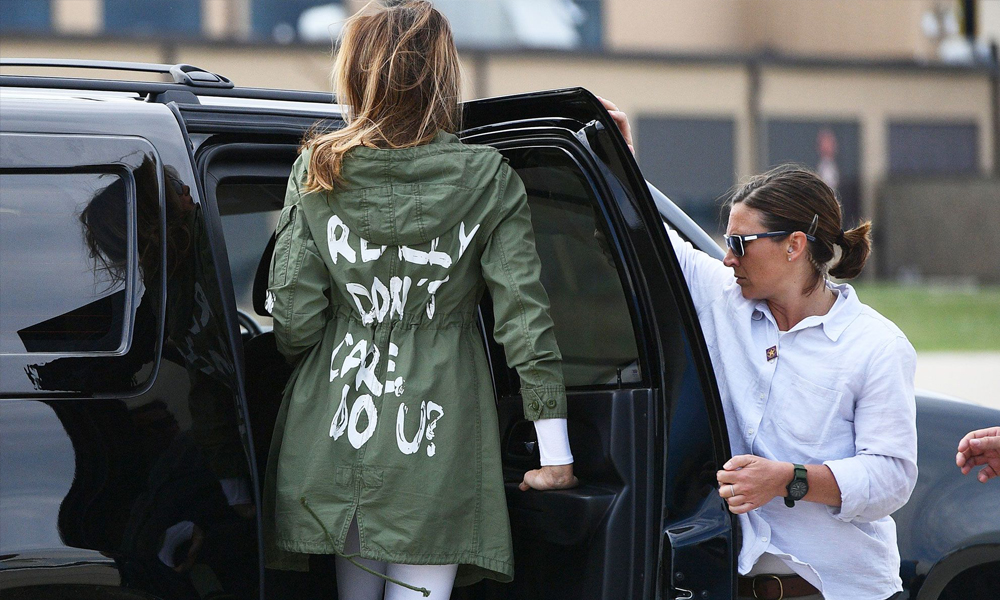 MELANIA TRUMP IN A CONTROVERSIAL JACKET

On her visit to the Texas Border, First Lady of the United States of America (FLOTUS) was spotted in another baffling sartorial moment from her outrageously unaware crisis wardrobe.

Melania is an immigrant herself, having come to the United States on an “Einstein visa” (for people with “extraordinary ability”) from Slovenia as a model then with a Camel cigarette ad in Times Square. So she probably is the one for this job.

The first lady met with officials and employees at the facility, where 55 children aged 12 to 17 are housed. Six of them were separated from their parents upon crossing the border, authorities told reporters.

President Trump And Melania Trump in a Military Jacket

The inscription on her jacket was said to have been in response to some of the president’s more brutal and unpopular policies.  Which was disagreed by the presidents tweet, offering an explanation to that, saying it was rather in response to the Fake News Media.

“I REALLY DON’T CARE, DO U?” written on the back of Melania’s jacket, refers to the Fake News Media. Melania has learned how dishonest they are, and she truly no longer cares!

All the same, people were furious over the jacket…

This is a deliberate effort by the Trump administration to shift the news narrative from children and babies being torn from their parents and locked in cages to Melania’s wardrobe. DO NOT FALL FOR IT. https://t.co/0OEBTy2GKJ

FLOTUS spox confirms Mrs. Trump wore a jacket to visit border kids that reads: “I really don’t care. Do you?” Spox says: “It’s a jacket. There was no hidden message. After today’s important visit to Texas, I hope the media isn’t going to choose to focus on her wardrobe.” pic.twitter.com/Bp4Z8n455G