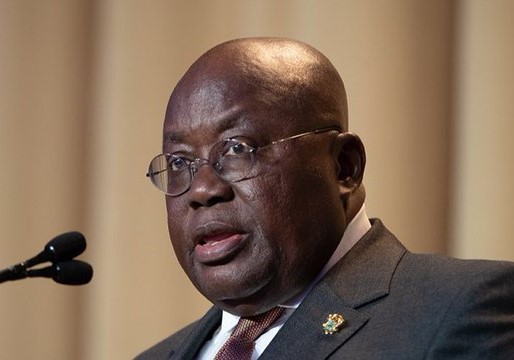 Speaking at the induction ceremony on Friday, 13th September, 2019, at the Accra International Conference Centre, President Akufo-Addo also revealed that the first batch of 48 ambulances, out of the 300 procured in fulfilment of the 1-Constituency-1-Ambulance pledge, has arrived in the country, with the second batch due in Ghana by the first week of October.

At the ceremony, which was also held to honour Dr. Evans-Anfom, a medical doctor who served as the second Vice Chancellor of the Kwame Nkrumah University of Science and Technology, President Akufo-Addo noted that the doctor-dentist-population ratio in the country remains very unsatisfactory after 62 years of nationhood.

“We currently do not have the right numbers of doctors, dentists and healthcare professionals, with the right mix of skills and expertise, in our regions, districts and deprived communities, especially for the newly created regions and districts,” he said.

The President encouraged the newly inducted practitioners “to follow the exemplary example of Dr. Evans-Anfom, and accept postings to accredited Regional and District hospitals, where your services are needed most, particularly during your second year of housemanship.”

He noted that the country would only keep the doctors it trains when agriculture and industry are thriving, when we have better roads, better communications, better schools, better housing, reliable and cheaper power supply, and better drainage.

“On my part, I am determined to work to help ensure that these improvements we all want in our lives become reality. Until that is done, we have to equip those currently in training and our fresh doctors to do a little more out of the ordinary to bring relief to the present situation,” he assured.

Government, according President Akufo-Addo, is committed to improving access to essential and quality health services through the provision of the necessary health infrastructure, equipment and logistics, including the deployment of appropriate technology as part of the drive to attaining Universal Health Coverage (UHC).

He added that the National Health Insurance Scheme, implemented by the government of President Kufuor, which was left in ruins by successive NDC governments has been revived again by another NPP-led Government.

He reiterated the determination of Government to making the scheme current in its obligations to service providers, and prevent the accrual of arrears, as was, unfortunately, been the case in the not so distant past.

In ensuring that the Ghanaian people receive the high standards of professionalism and conduct from healthcare professionals, President Akufo-Addo revealed that Government, through the Ministry of Health, has established the Quality Management Unit at the Ministry of Health to ensure that Ghanaians receive the best of healthcare services, irrespective of their geographical location.

In addition to launching Ghana’s Antimicrobial Resistance Policy and Action Plan, the President added that Government is engaging the Ghana Medical Association (GMA) to take another look at its codified conditions of service, which are overdue for review.

“Special attention would be paid to the rural incentives package to encourage professionals to accept postings to rural and underserved communities. We will continue to engage with stakeholders on how to care better for our health professionals, and how, collectively, we can make our healthcare system more responsive to the needs of our people,” he assured.

To the newly inducted doctors and dentists, President Akufo-Addo urged them to be guided by Hippocratic Oath, and be active citizens and bring doctors’ perspectives to public issues.

“I look forward to you not being narrow in outlook, but developing and maintaining a healthy interest in music, the arts, literature, the environment, sports, public life, and, yes, I want each one of you to be a renaissance man or woman,” he added.