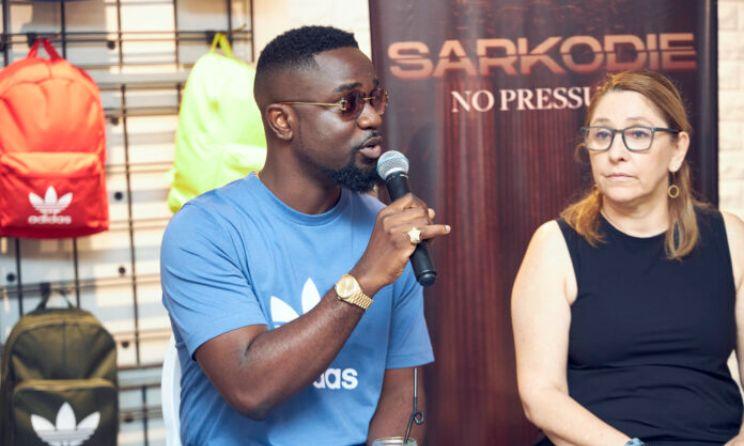 Nutmeg Limited, the company that represents sportswear manufacturer Adidas in Ghana, announced a partnership with rapper Sarkodie this week. According to entertainment company Eagle Plug, which brokered the deal, the collaboration is geared toward driving Africa’s creative economy and follows an October 2020 writing camp for emerging artists hosted by the musician.

“A successful Ghanaian act, Sarkodie is one of Africa’s most recognisable names and enjoys an incredible following, particularly in the urban culture space, which is also at the heart of Adidas’ experiences across digital platforms,” a press statement reads.

Nutmeg said that the arrangement tied into Adidas’ Creators Programme, which encourages partnerships between creators and celebrities in music, sports and fashion.

“The idea is that people create. In this case, Sarkodie is creating music, and we want to recognise, emphasise and put it out there,” Nutmeg CEO Valerie Fontanier-Ghajar said during a listening session of Sarkodie’s upcoming album No Pressure at the weekend. She said artist fashion greatly inspired the younger generation, many of whom were creators.

Sarkodie said he had admired the Adidas brand for a long time and expected a relationship that would go beyond the launch of No Pressure.

Meanwhile, Sarkodie was recently named creative director of the 2021 Ghana Party in the Park open-air festival, which will take place in London on 24 July. The award-winning musician will oversee the festival’s overall artistic direction, curate performances and develop strategic partnerships with stakeholders.

“I came on board not just because I’m Sarkodie and I want to perform. I don’t think that will be a big deal,” Sarkodie said at the festival’s launch in Accra. “I’ve been working with the organisers for a while, and I know that me being in the industry for a very long time means that there’s a little touch we can add, especially when it has to do with the artists. I’m sitting here representing the artists that are going to perform and make sure that they have the best as soon as they touch down in London.”

In this article:Adidas, Featured, Ghana, No Pressure