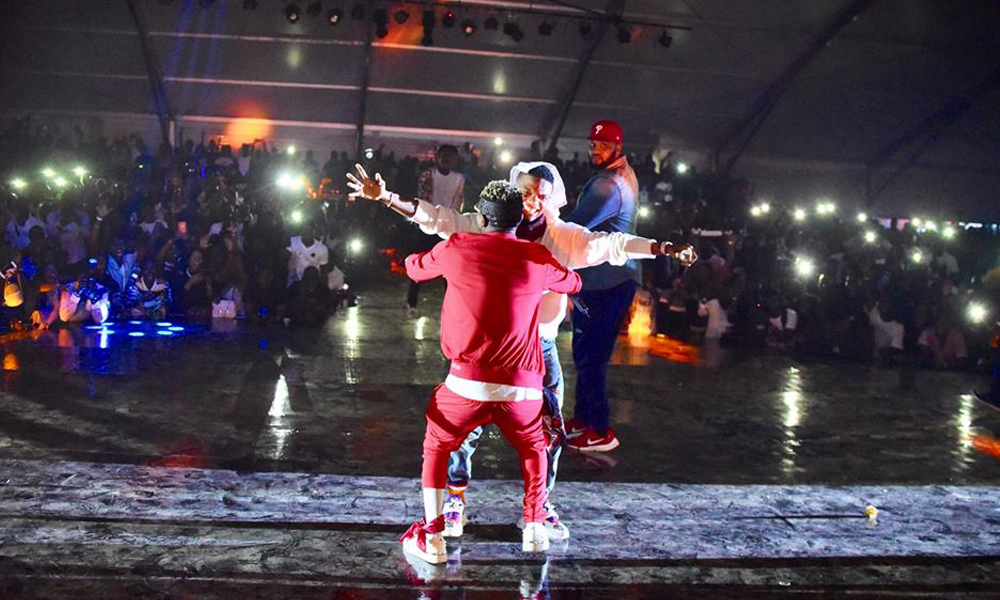 In the midst of an undying feud between the followers of the Shatta movement and the fans of Nigerian Musician Wizkid which was sparked by a comment Shatta wale made, – “I don’t see Wizkid as a superstar” – that generated a strong social media heat between followers of the two was laid to rest after Shatta Wale was united with Wizkid at this year’s Ghana meet Nigeria as the former openly called Wizkid his brother and a superstar, but guess what he called himself.

The Honcho of the Shatta Movement was introduced on stage by Wizkid to perform his freedom and currently raining Gringo hit songs. Midway through his performance, he addressed Wizkid a superstar and called himself a “fucking” super star, surprised? Don’t be that’s who Shatta Wale has shown us he is. A typical example of the Nigerian’s own popular phrasing “We never dey carry last”.

Shatta Wale’s introduction was the biggest surprise on the night, but fans were left unsatisfied with his performance when he dashed off stage after performing only two songs.

Though the musician was not billed to perform, his appearance was highly anticipated not only beacuase of series of tweets but also he is seen as the only Ghanaian to match up to Wizkid and win for Ghana on the night.

Ghana meets Nija is an initiative by Empire Entertainment to bring together Ghanaian and Nigerian arts in a collaborative manner than for a competition, over the years the brand has not failed its purpose and did not yesterday as well.

This year’s edition of the eight years running event was dubbed, “Rescue Mission” and the Fantasy Dome of the Trade Fair Center which played host to the event was filled to the brim with patrons who were eager, stood on chairs to witness and capture the moments on phones. Not forgetting those who broke out onto the main stage to touch and celebrate their favorite arts, but got prevented by the superb security present.