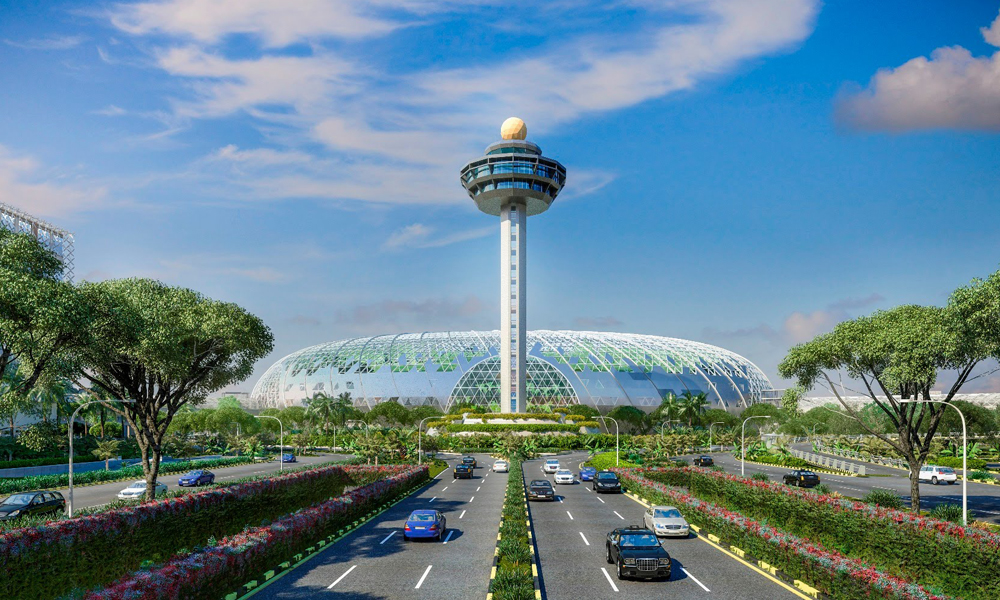 Walking trails amongst a lush jungle of animal-shaped topiaries in a five-story terraced garden. A 40-meter-tall waterfall cascading from an opening in a vaulted glass roof canopy. An art sculpture made up of four giant, integrated slides.

And that’s just scratching the surface.

The thrilling attractions at Singapore’s SGD$1.7 billion (US$1.27 billion) Jewel Changi, an addition to Changi Airport due to open in 2019, will boost the already impressive offerings of a facility that’s been voted best in the world for six years in a row.

With its “delicate” latticework of glass panels framed in steel, the distinctive donut-shaped Jewel is first and foremost a central hub, connecting three of Changi Airport’s current four terminals.

But it’s also potentially a destination in its own right, featuring a large mall to entice locals and visitors alike.

Conceived by Moshe Safdie as a new “magical garden,” hopes are high that the award-winning architect’s impactful building will become as celebrated as his Sky Pool at Marina Bay Sands.

While the gardens dominate the five higher floors, retail and airport facilities will take up the five floors below ground level.

“I think one of the reasons [we won] the bid was that the other submissions looked like malls and felt like malls, while this one, you don’t think of it as a mall, because it’s a new kind of experience. It makes us rethink what urban centers could be like if we stretch our thinking.”

A new garden for Singapore

The initial brief for Changi Jewel requested a few essentials.

“Some airport expansion space for Terminal 1, some checking in, a fair bit of retail and an attraction,” Safdie recalls.

“I came up with the concept of a magical garden, which was immediately embraced by CapitaLand [the developer who commissioned him as part of its bid for the project],” he says. “From then on, the project slowly evolved.”

Often promoted as a ‘City in a Garden,’ Singapore has worked hard to develop the pervasive greenery throughout its concrete jungle. It expanded its famed Botanic Gardens — a UNESCO World Heritage Site since 2015 — with the development of Gardens by the Bay, which opened six years ago.

“We were well aware that Singapore is already a well-endowed city in terms of gardens, so we wanted to offer something different,” says Safdie.

“I think you go to Gardens by the Bay because you want to learn about plant life, enjoy the sub-tropical environment — it’s an education process and a destination. Our garden offers a very different experience, it’s still light-filled, giving you this impression of being outside, but it’s completely indoors.”

Safdie’s sketch of the Jewel structure.

Safdie says he explored a variety of shapes through numerous doodles and sketches before settling on this donut-like torus shape, with a distinctive diagrid steel and glass roof.

“We had height limits, because of the aircraft and control tower, and we also had to work with the constraint of the site — which is rectangular — so it had to be an ellipse or a combination of paraboloids.”

Achieving his vision has not been without difficulties, especially as a monorail train connecting two of the terminals will pass through the middle of the site.

“It was a tricky geometric program because we couldn’t create a symmetrical torus as the waterfall would have been right above the train. It took a lot of computer work to create an asymmetrical torus where the center is actually off-center,” he says.

“But I think that turned out to be a beautiful form, giving it a particular elegance.”

Designed to handle up to 10,000 gallons per minute, the central oculus is key to managing the heavy rains that fall over Singapore. Safdie points out that the resulting waterfall output will be recycled through the building.

Controlling the amount of sunshine coming through without generating too much heat and still bringing in enough light for the plants to thrive, and save energy, was solved by incorporating triple Low-E glass.

Each of the 9,000 panels covering the facade is unique in size and shape, weighing between 250 and 300 kilograms, and they have a 16-millimetre air gap, which also helps reduce aircraft noise intruding into the Jewel.

Installing the panels has been like putting together a giant jigsaw and required careful execution when moving the panels from the ground to their place on the soon-to-be iconic structure.

“A trend that we have observed is an increasing number of passengers are taking up ‘self-connect’ options, which means they purchase two separate tickets and plan their own transit itinerary),” says Tan.

“We are observing a trend where more and more travelers are spending less time in major cities and are instead, exploring less discovered destinations to gain meaningful experiences beyond leisurely vacations,” says Hung.

“This makes the role of air hubs even more important in their travel journeys as these savvy travelers prefer to book their own flights and choose the airports they wish to transfer to and transit in.”

Jewel’s positioning as “a lifestyle destination uniquely fashioned with luscious landscaping to mirror Singapore’s reputation as a ‘Garden in the City’,” will make Changi Airport a compelling destination that can fill travelers’ needs for such experiential journeys, Hung says.

With 75% of the overall construction completed, visitors can already appreciate the Jewel’s distinctive shape, but they will still have to wait several months before experiencing Safdie’s magical garden and other attractions.