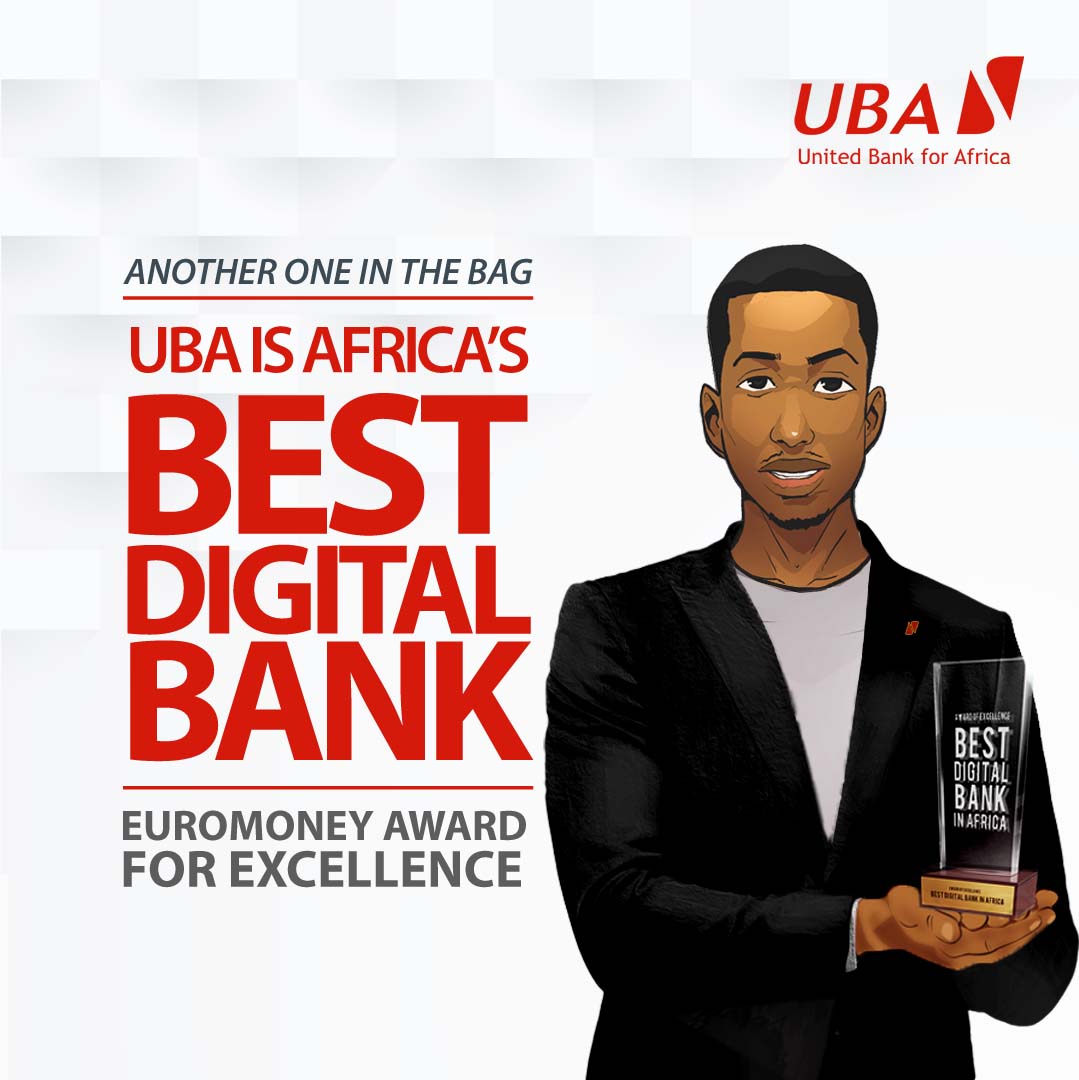 UBA, United Bank for Africa Plc, the Pan-African financial services group, has once again made an addition to its growing list of enviable laurels as it was named Africa’s best bank in the Digital category at the prestigious Euromoney awards in London.

This further lends credence to UBA’s dominance in the digital banking space. The Euromoney awards ceremony which was held on Wednesday, July 11, 2018 covers more than 20 global product categories, best-in-class awards and the best Banks in over 100 countries around the world, recognising institutions that have demonstrated leadership, innovation, and momentum in the markets in which they operate.

In selecting its recipients, Euro money’s principle is hinged both on quantitative and qualitative data to honor institutions that have brought the highest levels of service, innovation and expertise to their customers.

At the awards ceremony, UBA beat other nominees taking away the prize for best institution in Digital banking across Africa, an affirmation of its recent investment in cutting edge technology, one of which gave birth to Leo, the chat banker that has disrupted banking across Africa.

In a bid to be the undisputed leading financial services industry Africa in the area of innovation and technology, UBA has steadily included new and emerging trends to its range of solutions in-branches, across subsidiaries and on digital platforms. The emergence of LEO, has been a continuous directive to push the banking sector beyond financial services and to show that the bank truly comprehends the shift in operations and the movement of the global world with technology today.

The Euromoney award, which is a recognition of innovative products and services introduced by the bank in recent times and targeted towards meeting customer needs, comes on the heels of recent awards to UBA, including Finnacle Client Innovation Awards and Best Bank Awards won by five of its subsidiaries across Africa by The Bankers Magazine. UBA was also declared the best Bank in Africa in 2017.

Receiving the award at a well attended event in London, the Group Managing Director, Chief Executive Officer, United Bank for Africa, Kennedy Uzoka, appreciated the organizer’s for the recognition, noting that UBA’s dedication to hard work and particular emphasis to offering quality services to customers are being acknowledged.

According to Uzoka, the award affirms the Bank’s strong management and un-matched commitment to service excellence.

He said: “This only goes to show that our resolve in continuing to deploy innovative solutions that place customers first, using cutting edge technology for their collective satisfaction and excellent banking experience is important to us. This recognition will further spur us to do more in meeting the needs of our customers with unrivalled services.”

Uzoka stated “for us at UBA, the award is quite an accomplishment, considering Mark Zuckerberg, CEO Facebook and President Emmanuel Macron of France’s recent endorsement both of which centred around highlighting the distinguishing value of UBA’s leading digital opportunities”.

“Also, our recent launch of Leo in 15 African countries is evidence that UBA has on its agenda, the objective of digital creativity especially in service for our trusted customer base across the African continent.  This award reminds us as an institution not to relent in our pursuit of excellence and to continue to lead the new digital age in Africa, within the financial services industry’.

Clive Horwood, Euromoney Magazine’s Editor explained that:  “Despite fierce competition, one bank stood out in the last year for the inventiveness of its efforts in digital banking: United Bank for Africa. One of its signature launches in Nigeria was Leo, an e-chat service using artificial intelligence to help customers execute transactions on Facebook”.

“Recently, Mark Zuckerberg gave a nod to the service, during a talk at a recent developers’ conference – a sign of its recognition at the highest levels of digital technology. The bank also recently added retina and fingerprint recognition and technology to reduce business travel greenhouse emissions. If it fulfils its ambitious plans to partner with fintech companies, UBA could continue to lead African banks in the area of digitization. ”Horwood noted.

UBA is one of Africa’s leading banks with operations in 20 African countries and in London and New York, with   presence in Paris.

Adjudged to be at the forefront of innovation and convenient banking, UBA is one of the first financial services institutions on the continent to deploy Finacle 10x, a new information technology platform th

at boosts its services and electronic banking channels.

Today, UBA provides banking services to more than 15 million customers globally, through diverse channels and over a thousand touch points.