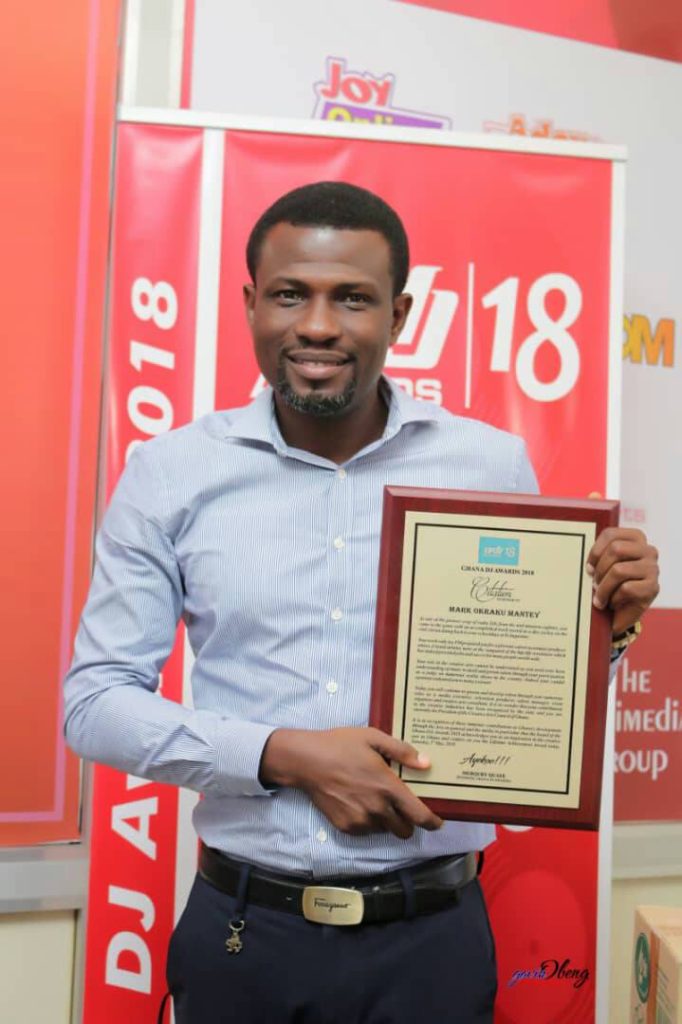 Officials of the Prestigious Ghana DJ Awards has officially presented Mark Okraku Mantey with his citation and prize. Mark Okraku who was unable to attend the highly attended event held on Saturday, May 5th, was honoured for his contribution to ‘deejaying’ in Ghana. In a brief ceremony held at the offices of the Multimedia Group, Mark received the Citation with joy and thanked the Ghana DJ Awards board for honouring him.

In his rather passionate acceptance speech, the Creative Arts Council President said, “I had nothing to show for my work as a DJ but I now have something to refer to and show to my children. My profound gratitude to the board and organizers of the Ghana DJ Awards for this prestigious honour and thanks to Device Tech Addiction and Kriss Coconut Milk for the prizes. I will use these products and give you feedback”, he added. Those who are quite old and have followed music entertainment would remember the great work Mark did when he was at Joy FM. He was one of the few DJs at that time. Mark Okraku also played at Balm Tavern as a nightclub DJ. At the same time, he played at several parties, leaving a mark of excellence at each. As programs manager at Hitz 103.9fm, Mark has powered the agenda of DJing, helped recruit top DJs including Ghana’s finest hypeman, Merqury Quaye, and facilitating the unearthing of unique talents through radio talent shows.

The Ghana DJ Awards was created to celebrate and appreciate the talents of Disc Jockeys (DJs) who promote Ghana music. The Awards is an exciting annual program designed to foster the development of the Ghana music industry by rewarding and celebrating Radio, Mobile and Club Disc Jockeys who have excelled in their fields of endeavour. It is, actually, the only national award scheme in Africa that appreciates and celebrates DJs for their work. It is also a platform that rewards veteran DJs who have blazed the trail in the music industry over the years. The main objective is to recognize the electronic dance music scene and seeks to let the world know that the art of Disc Jockeying is a respected craft, with DJs playing a major role in the overall Music and Entertainment industry.