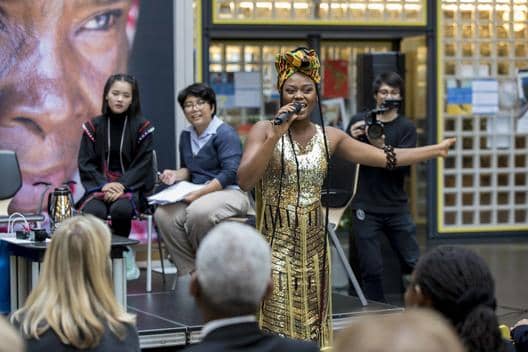 The only African who was billed to perform at the high profiled event also gave a brief speech on the Statelessness issue from the African perspective. She then performed songs like Akyia, I Want, Someone Loves Me among others, but the climax was when she performed her song, ”I Belong” the song she composed to address the phenomena called “statelessness”.

The event was well attended and including attendees were the High Commissioner Filippo Grandi and a formerly stateless woman Artee who lives in Thailand.

Statelessness is a situation where a person is denied his or her nationality. It is estimated that at least 10 million people are stateless worldwide: they are not considered as nationals by any State under the operation of its law. They often aren’t allowed to go to school, see a doctor, get a job, open a bank account, buy a house or even get married.

eshun upon return will release the official music video for her latest hit song Akyia this November.

Below are more pictures and videos from her performance.

In this article:Eshun, Featured, GH Music