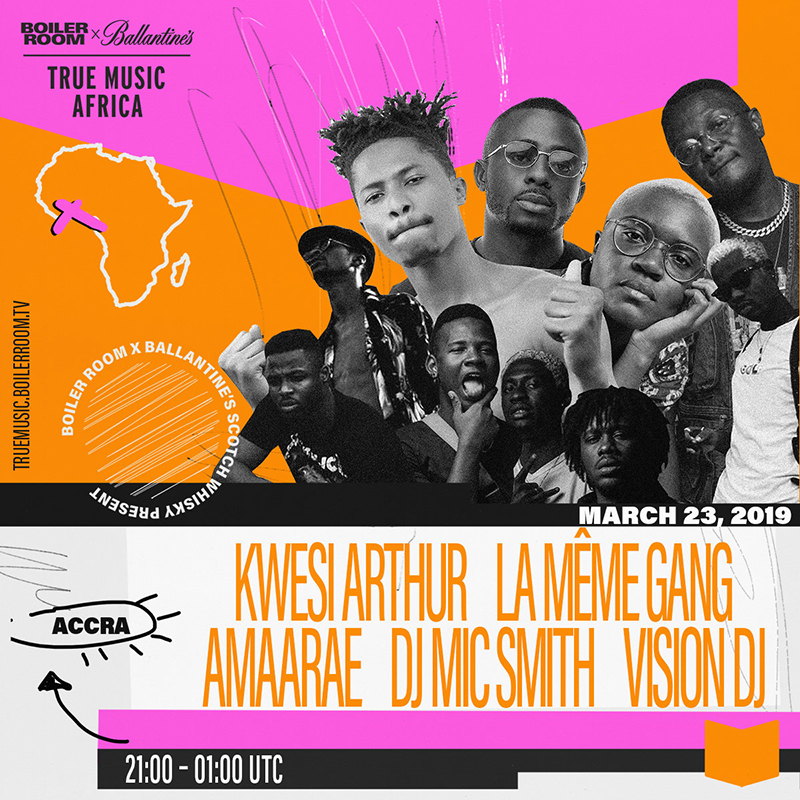 Boiler Room and Ballantine’s announced Accra as the next stop for True Music Africa, a tour that unearths pioneering True Music artists and their stories of doing it for themselves in the underground music scene. Broadcasting their performances to an audience of more than 17 million around the world, True Music Africa shares artists’ insights and experiences of their local music scenes via a compelling documentary series.

This year’s edition of the event follows the success of recent global True Music projects, including last year’s Hybrid Sounds tour, and is slated for Saturday, 23rd March at a secret location in Accra and will feature live performances from a flavoursome array of Ghana’s buzzing hip pop, rap, trap and R&B scenes to represent the continent.

True Music Africa will welcome a killer line-up of the country’s most exciting, independent artists for another incredible show in a music scene that’s currently booming, where young, ambitious Ghanaian artists are becoming inspirational stars.

Ghana is a first for Boiler Room and Ballantine’s True Music Africa which has previously toured South Africa, Cameroon and Kenya and has given a global platform to some of the freshest talent the continent has to offer.

Meanwhile, Chief Business Development Officer at Boiler Room, Steven Appleyard stated that, they’re tremendously excited to take True Music Africa to Accra, Ghana, adding that, this will be the first time they have touched down in the country, a place whose rich musical heritage has influenced a new wave of fresh young talent re-working hip-hop, trap, rap and R&B.

According Mr. Steven Appleyard, they couldn’t be more excited to be pushing the sounds of these artists to their audience and showing them what’s happening in this special part of the world.

Head of Music at Ballantine, Tom Elton also added that, with True Music Africa they’ve been able to explore some of the continent’s most vibrant and diverse music scenes and share them with the world, stating that, there’s a real buzz and energy around the continent right now which is why they’re so excited to head to Accra.

Mr. Tom Elton revealed that, Accra Ghana has been a location where their tourism feathers has never been before and see what this energy is bringing to their local scene. He mentioned that, it feels like the perfect time to be able to shine a light on Ghana’s fantastic young independent talent and there’s no better partner to do this with than Boiler Room.”

Boiler Room and Ballantine’s are committed to supporting and celebrating uncompromising artists who do it ‘their way’. With their True Music platform, the partnership champions artists with a perseverant spirit and challenges them to continue pushing boundaries.