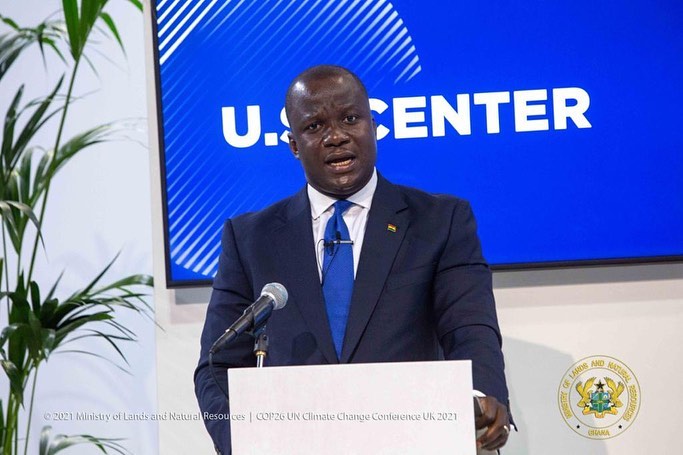 Hon. Samuel Abu Jinapor, Minister of Lands and Natural Resources has commended Stonebwoy for his role as a whistle-blower in speaking out against illicit goldmining in Ghana.

The Minister, who currently is at COP26 summit in Scotland — where parties are brought together to accelerate action towards Climate Change, in a conversation with Bernard Avle on Citi TV’s “Point of View” said, Stonebwoy has exhibited a noble and patriotic gesture by using his voice to campaign against the growing menace of the country with his revolutionary song “GREEDY MEN”.

“Let me use the opportunity to thank and commend Stonebwoy for this timely intervention,” he told Bernard Avle in the interview. “I want to say to him that, it is very noble and patriotic gesture that he has taken. This is a national issue and the consequences of it impacts on all of us.”

He added: “Of course Government must take the lead role in fighting this cause, but the kind of intervention by Stonebwoy is welcoming and I want to commend him highly for selfless thoughts and significant step taken. This is an opportunity for Stonebwoy and I to have a painstaking and detailed conversation about this menace which is because of high unemployment rate.”

The GRAMMY and BET awardee is known for being a voice of the ghetto youths and a vocal egalitarian on social issues of concern. His previous songs like “Run Go”, “Black People”, “Suit & Tie” and more have highlighted his revolutionary voice along same concerns — and to a larger extent taken centre stages at purpose driven revolutionary events or occasion.

His latest conscious reggae track “Greedy Men” paints a realistic image of what it’s like to be a Ghanaian living in or near mining areas. In the song, he spoke about the economic loss, greater loss of life and property, poisoning of soil and groundwater, biodiversity loss, chemical leakages, and other long-term negative repercussions the activity is having on the country.

“Because of illegal mining, cocoa production is declining. Deforestation and rise in violence are climbing every day. Many men shall die because of the greediness of another man,” Stonebwoy said in the song.

In the video of the song, he gives a vivid depiction of how these foreign nationals engage in illegal gold mining in Ghana in their quest for riches at the detriment of the people. He also revealed how they use the underprivileged as cheap labour in mines of communities where they laboured long hours for peanuts to dig gold and other important minerals to profit themselves.

The elite Ghanaian musician explained that the song is timely as the menace of galamsey do not only affect the indigenes but the entire nation. He added that the fight is a collective one which should not be left to government alone.