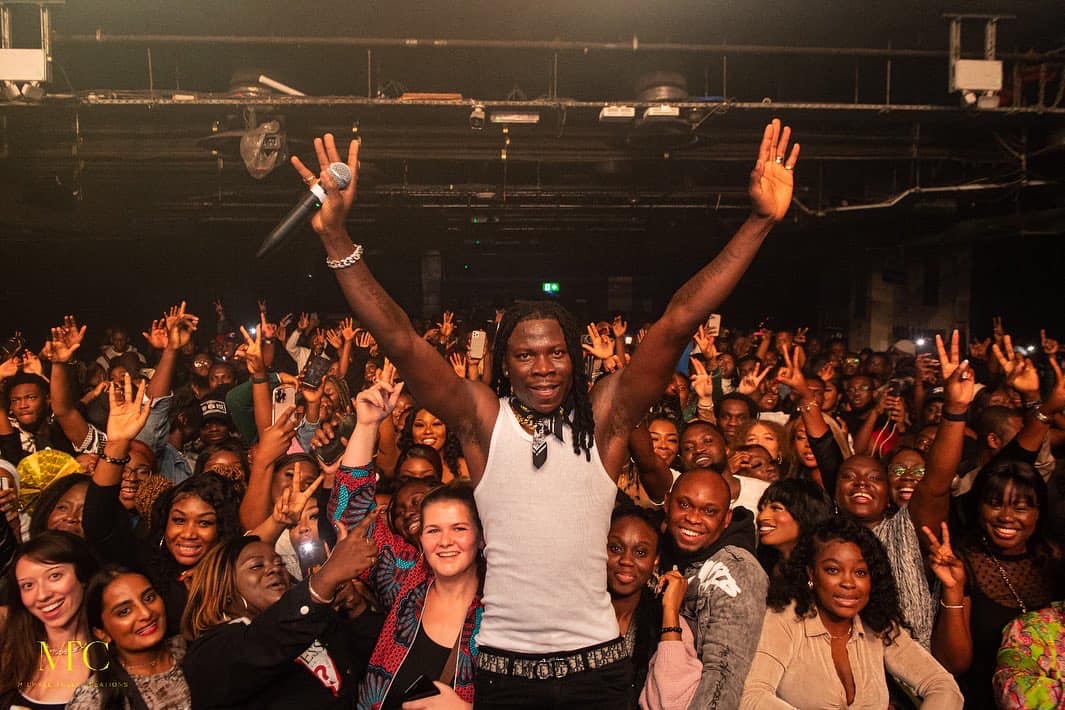 It was the maiden, the big one, the one to matter to the Gh community and Africa within the UK as Sunday 21st November 2021, was the very first night to Stonebwoy’s amazing history makers night as this was the night Stonebwoy graced the UK with his very first headline show, entitled ‘Anloga Junction – UK Tour’ and believe Stonebwoy repp’d and made Ghana and the whole of Africa proud together.

The night was opened by some of the UK’s 1st class dj’s with DJ Special D, DJ Fiifii and the trio which is GH B2B who wowed the crowed and warmed the house with the vibes. MC OJ showed London the love that he does so naturally and of course the night wouldn’t have been right without DJ Neptune gracing the event with a special kinda vibe!

Before Stonebwoy graced the stage the crowd were so hyped and ready for the BHIM President as performances from Fresh Andy and Amaria graced the stage to remind everyone that the Caribbean unites with Africa and everyone should be unapologetic about that love.
So the President yeah. Don’t worry I won’t delay, because I can already hear you asking.

Well what are you expecting? Let’s just say, you don’t carry the tag ‘Bless His Imperial Majesty’ without blessings flowing your way!!! And blessings really flowed Stonebwoy’s way on the night. Stone came and he gave the love as much as London gave him love.

Now if your unfamiliar with the “London vibe”, let’s just say Londoners are not an “easy” crowd as past shows have seen performers giving their all with Londoners just starting back at them BUT not for Stonebwoy. The crowds showed up in their numbers from old skool BHIM natives to the new wave of young and diverse who came with energy in full force for the President, singing his songs back to back in harmony with dancing to Stone. In the crowd, reppin and showing love was DJ Neptizzle, SMADE and the Compozers.

The venue was packed and all the air could say was ‘wow, Stonebwoy, what a guy, what a performer – amazing.

Stonebwoy was joined on stage by Cuppy, Article Wan and Alicai Harley who continued in the celebrations because it was more than an ‘African Party’.

Of course 21/11 is Davido’s birthday, Stonebwoy mentioned that the night could not end without the whole venue wishing Davido a very special birthday, which is what took place as the party continued on.

Stonebwoy continued the night along on time with respect and valour as a true showman in partnership with a full live band giving us the juice and DJ Justice of course on the decks.

Now I could go on but I won’t as you really need to find yourself supporting the vibe and being at Stone’s next gigs across the globe; but on this one I will say, UK let the ‘African Party’ continue because up next on the AJ UK tour is 25th Manchester and Birmingham on the 26th November. So who’s ready for the shutdown Stonebwoy style because the President comes never to disappoint and no matter who you are, Akwaaba. When Stone is on the stage it’s a Stonebwoy and friends affair!

So on that note, well done UK, you are officially BHIMnatives!